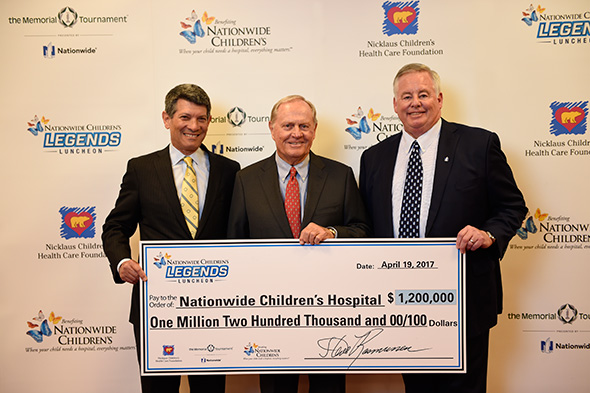 True to the hearts of Jack and Barbara Nicklaus, the Memorial Tournament presented by Nationwide includes as one of its primary objectives a genuine, philanthropic vision. It is through the Tournament’s partnership with Nationwide Children’s Hospital that this vision comes to life in the form of pediatric care for children, not only in central Ohio, but from all 50 states and more than 50 countries each year.

Hosts of Legends Luncheon presented by Nationwide were Jack and Barbara Nicklaus, together with Nationwide CEO Steve Rasmussen and his wife, Cindy, and Nationwide Children’s Hospital CEO, Dr. Steve Allen and his wife, Dr. Jamie Allen. Luncheon guests experienced a charity event that is unique to Columbus, Ohio. Held at the Ohio Union on the campus of The Ohio State University, guests enjoyed a special conversation with Memorial Tournament Host and Founder Jack Nicklaus and 2017 Memorial Tournament Honoree and World Golf Hall of Fame member Greg Norman.

The final highlight of the Legends Luncheon presented by Nationwide was the presentation of the Nicklaus Youth Spirit Award, which is given annually to a patient or family who in some way has demonstrated a strong, driving spirit in overcoming obstacles, an unwavering optimistic outlook, and a strong conviction for their connection to Nationwide Children’s Hospital.

When Makya was born on June 17, 2006, he couldn’t breathe and experienced regular seizures. He was immediately transferred to the NICU at Nationwide Children’s, where doctors found that he was born with a tracheoesophageal fistula (TE fistula), an abnormal connection in one or more places between the esophagus and the trachea. Makya required surgery.

In January 2009, Makya received a VEPTR implant, which is a growing rod that has to be lengthened in the operating room approximately every six months. From 2009 to 2016, Makya was either lengthened or “revised” every six months. However, in March 2016, he received a MAGEC rod, which has allowed him to avoid frequent surgeries. Now, although still painful, his lengthening procedure occurs more frequently, every other month, but does not require surgery.

Makya’s 15 back surgeries haven’t stopped him from doing the things he loves—riding horses, playing baseball, running and riding his bike. He doesn’t let anything hold him back and faces each day with courage, a smile, and a positive attitude.

“Nationwide Children’s Hospital has enabled Makya to not only live, but to live a somewhat normal life. Without the innovative procedures and rods, I truly believe that he would not be alive today,” said Makya’s mother, Teena.