The King & Bear Golf Course in St. Augustine, Fla., part of the World Golf Village Resort, has completed a full bunker renovation led by Nicklaus Design and is ready for the spring golf season.

The project was completed in February to meet all of the desired objectives. The 18-hole, par-72 championship resort course, which opened in 2000, is the only golf course design collaboration by Jack Nicklaus and Arnold Palmer, who passed on September 25, 2016, after a legendary career—and a friendship and rivalry with fellow competitor turned golf course designer Jack Nicklaus that is the subject of storybooks.

The King & Bear golf course gets its name from both designers. Palmer earned the nickname “The King” during his playing career, while Nicklaus adopted the “Golden Bear” moniker.

“I grew up watching my father and Mr. Palmer compete, but more important, I witnessed one of the greatest friendships you might ever find in any sport,” said Nicklaus Design President Jack Nicklaus II. “When they had the chance to collaborate on the King & Bear, I know it was a tremendous opportunity that both of them embraced. The result was a wonderful tribute to the game of golf and the way they see it played. Now, almost two decades later, it was an honor and pleasure for our team at Nicklaus Design to oversee the renovation of this course for future golfers and generations to enjoy.”

The bunkers at the King & Bear have been lined with Capillary Concrete™ to virtually eliminate washouts, soil contamination, plugged ball lies and other bunker maintenance problems. Capillary Concrete, a sports-base drainage and hydrating material, was laid under the sand. The renovation was carried out by contractor MacCurrach Golf.

All of the bunkers have been filled with g-angle sand. The manufacturing process of the sand cracks, crushes, and grinds coarse silica sand into angular particles. These particles interlock to create firmer, more playable bunkers that are less expensive to maintain. G-angle sand provides greater wind resistance and excellent drainage to prevent washouts.

“Overall, the work that has been done will enhance the playability for golfers while easing maintenance requirements for our staff. We are thrilled with the work that has been completed and couldn’t be more excited about the upcoming spring season,” said Bob Barrett, CEO of Honours Golf, which manages the world-famous facility.

Co-designers Nicklaus and Palmer, both World Golf Hall of Fame members inducted in the inaugural class in 1974, put the spotlight on their decades-old friendship, rather than their storied rivalry, to collaborate on the design. King & Bear stands as a representation of their shared love of golf course design. Arnold Palmer Design has created more than 230 golf courses worldwide, and Nicklaus Design has 410 in 41 countries. These two legends of the game put their heads together and the resulting golf course is beautiful, challenging, and remarkable.

Jack Nicklaus and Arnold Palmer officially opened the golf course on November 15, 2000. Not long after in 2001, the two played each other on the layout in the Shell’s Wonderful World of Golf series. Palmer shot his age in the first match, a 1-under 71, and Nicklaus shot a 75. They were teammates later that same week on the same course for the Legends of Golf on the Senior PGA Tour, now the PGA TOUR Champions.

“We always want to beat each other, and that’s what is great about our relationship,” Palmer said after shooting his age on the course. “I hate him out there and he hates me when we play. But when we walk off that course… it’s great to have a friend like Jack Nicklaus, and I hope he feels the same way about me.”

Of their storied rivalry and friendship, Nicklaus explained, “We spent a lot of time together, but we loved beating each other. That was what, you might say, ‘wound our watches.’ But Arnold was always my friend. He always had my back and I always had his back. He was a great guy. He did so much for so many that I am just happy I was one of them.”

So enamored was he with the course he helped design, Palmer selected King & Bear’s hole No. 15 as one of his “Dream 18” in Sports Illustrated’s Preview to The Ryder Cup 2006. King & Bear also was named to Golf Digest’s list of the Top Public Courses in Florida in 2015. The layout was also selected to Golf Magazine’s 2016-2017 list of the Best Courses You Can Play in Florida.

Since its inception in 2000, King & Bear has hosted the Legends of Golf, a PGA TOUR Champions event; the Shell’s Wonderful World of Golf match between Palmer and Nicklaus; and Qualifying Schools for the PGA TOUR and PGA TOUR Champions. For more information or to book a tee time, call 904-940-6088 or visit golfwgv.com.

Honours Golf, which manages a collection of resort and private facilities mostly in the southeastern U.S., is a division of Troon Golf.

About the King & Bear

The King & Bear (www.golfwgv.com) is one of the Official Golf Courses of the World Golf Hall of Fame and a part of the World Golf Village located in St. Augustine, Florida. The King & Bear gets its name from both of its designers. Palmer earned the nickname “The King” during his playing career, while Nicklaus adopted the “Golden Bear” moniker. They officially opened the golf course on November 15, 2000, and it remains the only collaboration in the world between the two golf legends.

The course is managed by Honours Golf. Headquartered in Birmingham, Alabama, Honours Golf was founded on a vision to provide award-winning golf courses with unparalleled course conditions, hire dedicated team members who share a passion for golf, and deliver impeccable personalized service. As a result, Honours Golf has grown to become the Southeast’s leading golf course development and management company. In 2014, Honours was acquired by Troon and operates as a subsidiary of the global brand.

Representing the first time that golfing legends Jack Nicklaus and Arnold Palmer have co-designed a course, The King and The Bear blends natural genius with natureÍs beauty. The front nine… 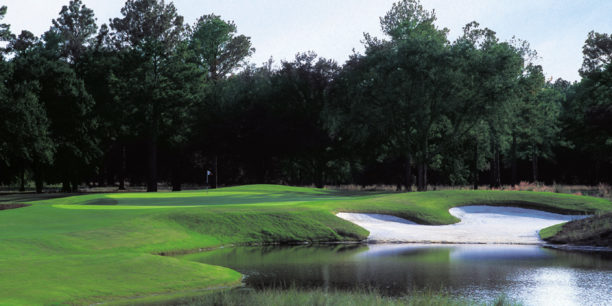