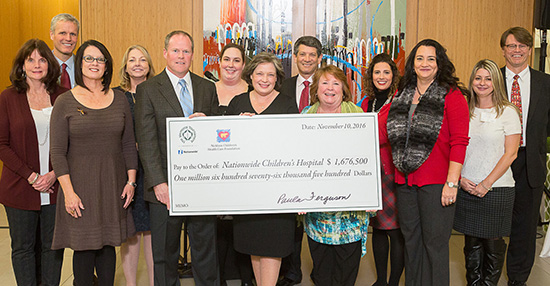 Officials of the Memorial Tournament presented by Nationwide announced that the 41st playing of the prestigious invitational, concluded June 5, 2016, raised $2,166,000 for charitable organizations in central Ohio, including a record-setting $1,676,500 for Nationwide Children’s Hospital through an alliance with the Nicklaus Children’s Health Care Foundation. Since its first playing in 1976, the Memorial has eclipsed $27 million in donations to central Ohio charities, with more than $16.5 million going to Nationwide Children’s Hospital.

“Charitable giving has been a core initiative for the Memorial from its beginning, and we are proud that the Tournament has been successful in growing its commitment to the local community and charity, especially its more than 40-year relationship with Nationwide Children’s Hospital” said Dan Sullivan, the Tournament’s executive director. “The shared philanthropic vision of presenting sponsor Nationwide has also been vital to our annual successful charitable campaign and the Memorial is grateful to continue that relationship through the 2021 Tournament.

“Other contributors to the Memorial’s record year in charitable giving include the success of events like the annual Legends Luncheon and the FORE! Miler,” Sullivan added. “In addition, the dedication and commitment exhibited by the Tournament’s volunteer corps, in particular the members of the Women’s Division Committee and the over 2,000 Nationwide Children’s Hospital volunteers, is an essential ingredient in making the Memorial one of the top tournaments on the PGA TOUR and a must-attend event in central Ohio.”

Nationwide, which has been the Tournament sponsor for seven years, shares a similar tradition of support for Nationwide Children’s Hospital. Nationwide is committed to broadening the impact of its presenting sponsorship of the Memorial Tournament to bring greater awareness and increased funding to Nationwide Children’s and to those who benefit the most: families and children in need of care. That commitment was on full display in December 2015, when Nationwide, the Memorial Tournament and PGA TOUR announced a six-year relationship that began with the 2016 Tournament. The agreement extends the partnership between the three organizations through 2021.

“The Memorial Tournament provides a national platform to tell the story of the life-saving work being done at Nationwide Children’s Hospital,” said Terrance Williams, Nationwide’s chief marketing officer. “We’re honored to partner with a tournament that generates much-needed funding and attention to the mission of the hospital, which is to provide outstanding care to every child, regardless of a family’s ability to pay.”

The 2017 Memorial Tournament presented by Nationwide is scheduled for May 29–June 4 at world-renowned Muirfield Village Golf Club. The public may call the Tournament Ticket Office 9 a.m.–5 p.m. weekdays at 877-MT BADGE or visit mtbadge.com to purchase badges. Kids 16 and under can attend for free with a ticketed adult, and kids 18 and under are admitted free on Wednesday, May 31, 2017, for Junior Golf Day. Daily practice round tickets for Monday, Tuesday and Wednesday are also available. The introductory cost is $35 through January 31, and they are valid for all three practice-round days.

About the Memorial Tournament presented by Nationwide

The Memorial Tournament presented by Nationwide is held annually at Muirfield Village Golf Club in Dublin, Ohio, a suburb of Columbus. The Tournament, founded and hosted by Jack Nicklaus, is conducted each year with three goals in mind: to honor the memory of individuals living and deceased who have distinguished themselves in the game of golf; to showcase the world’s best golfers competing on one of the most challenging venues in the world for the enjoyment of spectators; and to benefit many Greater Columbus Charities in alliance with the Nicklaus Children’s Health Care Foundation, Nationwide Children’s Hospital and numerous other local organizations. For more information, visit www.thememorialtournament.com or call 614-889-6700.