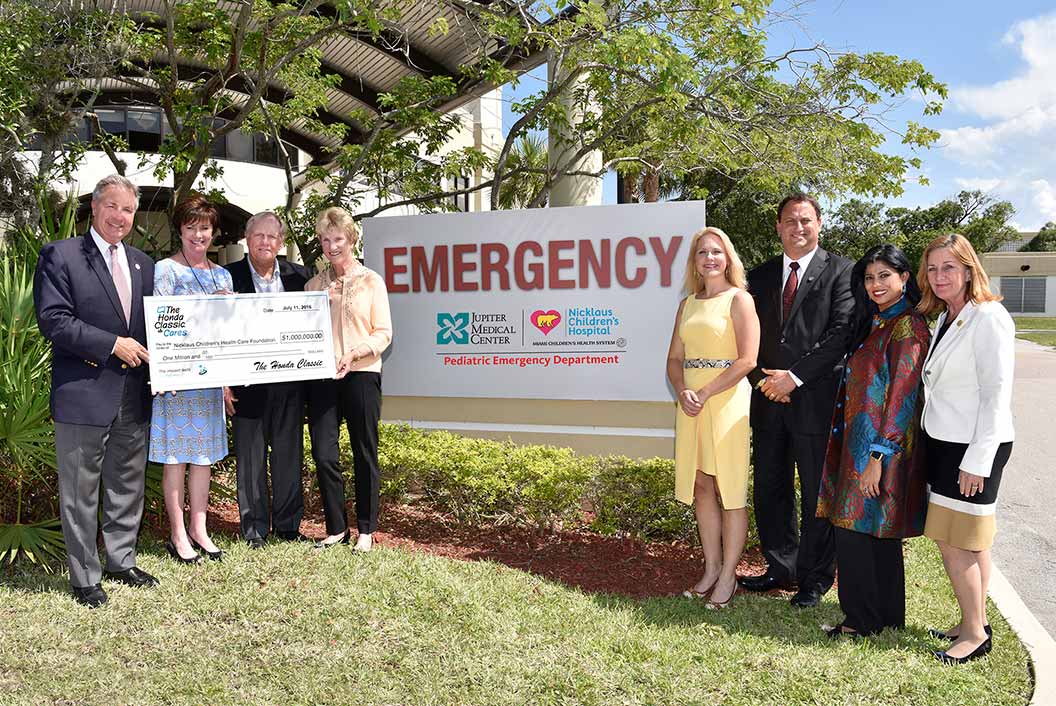 The Honda is awarding a record $3.212 million to local children’s charities during Honda Classic Cares Week July 11-15, obliterating the previous mark of $2.55 million that was distributed in 2015.

The record charitable distribution and the largest single grant in tournament history are a continuation of the monstrous growth the PGA TOUR event has crafted since moving to PGA National Resort & Spa in 2007 under the direction of Children’s Healthcare Charity, Inc.

The Honda is awarding grants to 50 different local charitable organizations, impacting the lives of more than 30,000 children.

Some of the initiatives evolving from that giving range from contributing to the state-of-the-art Els Center for Excellence for autistic children in Jupiter to After-School and summer programs for kids at Adopt A Family of the Palm Beaches, to a restoration of the Village Program of Scouting with the Gulfstream Council Boy Scouts. The Honda Classic sponsors summer camp for 35 kids at the YMCA of the Palm Beaches, an art education program for underserved youth at the Artist Showcase of the Palm Beaches, Cystic Fibrosis patient care at St. Mary’s Medical Center, caregivers for abused or neglected children at Grandma’s Place, Inc., a $10,000 golf scholarship at Palm Beach Atlantic University, food for kids at the Palm Beach County Food Bank and is making a major contribution to the creation of a 250-seat auditorium at the Leadership Academy of Urban Youth Impact.

An additional 101 charities received proceeds from the American Honda Birdies for Children program, where fans donate for the chance to guess the number of birdies in the tournament. American Honda awards a new Honda Civic LE to the winner. Fifty-nine individuals guessed the proper birdie total of 1,246 in 2016 and the car will be awarded by drawing at a reception for charity partners on July 11.

Honda Classic Cares Week is a celebration of the impact the tournament is making in the community. Many of the organizations benefiting from grants will receive site visits from Honda Classic representatives throughout the week.

“It was another spectacular year,” Honda Classic Executive Director Kenneth R. Kennerly said. “Our continued success is a tribute to the immense commitment for the past 35 years from American Honda, our two founding partners Tire Kingdom and United Technologies, other sponsors, volunteers and our great fan base that continues to support the tournament each and every year.

“We are fulfilling our vision that was born 10 years ago when we set out to make a significant impact in our community. We have accomplished that by presenting one of the elite events on the PGA TOUR each year and by raising a substantial amount of money to help the many children’s charities in our area impact the lives of young people.”

Through the support from the Foundation, a pediatric partnership between Jupiter Medical Center and Nicklaus Children’s Hospital was established; paving the way to make world-class pediatric care accessible to residents of Palm Beach and Martin counties. Earlier this year, the partnership commenced with the opening of the Nicklaus Children’s Hospital De George Pediatric Unit at Jupiter Medical Center. Now, with the support from The Honda Classic, the $1 million grant serves as the campaign catalyst to build the new pediatric Emergency Department.

“Our partnership with The Honda Classic was the inspiration behind Jack and Barbara Nicklaus establishing the Nicklaus Children’s Health Care Foundation,” said Patty McDonald, Foundation President and CEO. “The unwavering support and generosity from The Honda Classic over the years has allowed the Foundation to bring world-class pediatric health care to our community. We are blessed to be the recipient of this historic grant which will serve as the lead gift for this exciting new facility just for kids!”

“We were so proud to be a part of establishing the pediatric inpatient unit at Jupiter Medical Center earlier this year, and now we’re helping to ensure that families in our area who need pediatric emergency medical assistance can get the very best care, tailored to their needs,” golf icon Jack Nicklaus and his wife, Barbara, said in a shared statement. “The Honda Classic has been a source of pride and, in many ways, a gift to the communities in and around Palm Beach County. Now, through their continued generosity, they are giving the gift of improved pediatric care to the families in these communities.”

The gift to Jupiter Medical Center is the lead donation for an eventual $5 million project. It was the logical next step for the Center as it expands upon its relationship as a pediatric partner with Nicklaus Children’s Hospital.

“We continue to reimagine the way we deliver health and wellness to our community each and every day, and it is partners like Honda Classic Cares and the Nicklaus Children’s Health Care Foundation that make this possible,” said Jupiter Medical Center’s President and Chief Executive Officer, John D. Couris. “We have provided emergency care to the children of our community since we opened our emergency room. Through our partnership with Nicklaus Children’s Hospital we added pediatric specialist consults in the ER using telehealth technology and dedicated pediatric emergency room doctors at peak hours. This new endeavor to build a dedicated pediatric emergency department will give families their own waiting area as well as eight pediatric treatment rooms with a child-friendly environment to reduce anxiety for our smallest patients.”

The growth is a testament to American Honda’s 35 years as the longest-standing title sponsor on the PGA TOUR as well as partnerships with PGA National Resort & Spa, PGA of America, Palm Beach County, the City of Palm Beach Gardens and the PGA TOUR along with the support from major local partners such as Tire Kingdom, United Technologies and FPL. Player, corporate and spectator support has led to increased ticket sales, parking revenues, concessions and sponsorships.