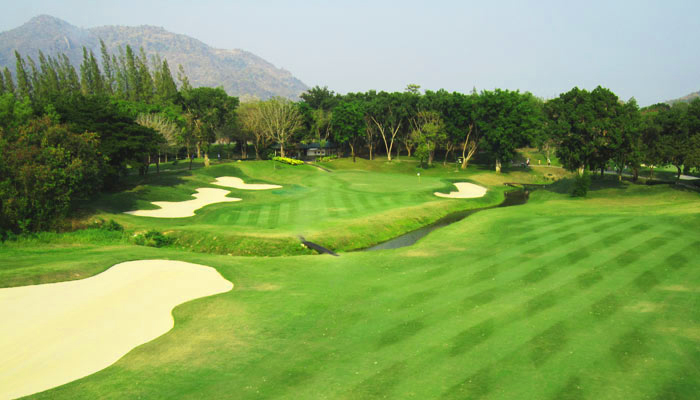 A total of 245 players will compete in the event, where the first two rounds will be played at the Jack Nicklaus Signature Golf Course at Springfield Royal Country Club and Imperial Lakeview Golf Club, while only Springfield Royal will host the final two days. Players who finish in the top-40 and ties will secure playing rights on the Asian Tour in 2016.

Springfield Royal opened for play in 1993 and is one of seven Nicklaus Design golf courses to open for play in Thailand since 1991. It has been ranked in Thailand’s top-10 by Golf Digest. This is at least the third time Springfield has hosted Q School for the Asian Tour.

In 2015, there were no fewer than 30 tournaments played on Nicklaus Design courses in nine countries, including the first-ever playing of The Presidents Cup in Asia at Jack Nicklaus Golf Club Korea.

Malaysia’s Gavin Green believes a top-40 result in the Final Stage of Q School will jump start his career. The big-hitting 22-year-old, who created headlines when he became the first amateur to win on the Asian Development Tour in 2014, is aiming for a successful debut at the Qualifying School.

“The game’s quite solid,” Green said. “I saw my coach, Chris O’Connell, in the United States recently and we worked on a few [things] like getting my shots more consistent and hitting it more solid. It’s been six months since I last saw him. I had a much-needed break as well, and I am glad to be back here, all ready to go.”

Green, who joined the professional ranks last June, admitted it took him some time to get used to the transition from being an amateur to a professional.

“There are a lot of good players out here. It’s not going to be easy but if I can play some good golf, I should have a good chance,” Green added. “Winning on the ADT before does give me some confidence but it’s pretty different now, as I’ve turned professional since. It took a bit of getting used to but I have learned to pace myself and not exert too much stress on myself.”

“This is my first time playing in the Asian Tour Qualifying School,” Paradorn said. “I am very happy to get the opportunity to play here. I think making the mark at the Qualifying School will be a great step forward, if I want to turn professional. It will be a good start for me.”

Paradorn, nicknamed ‘Ball,’ was the first men’s singles tennis player from Asia to be ranked inside the top-10 of the ATP (Association of Tennis Professionals) rankings, where he reached a career high world No. 9. He hopes to enjoy the same success on the golf course this week.

“Golf is really different from tennis,” added Paradorn, who resides in Pattaya. “It is more difficult on the mental side. You’re not always playing against other players. Sometimes you’re just trying to beat yourself. I will just treat this as another tournament. I will play my own game, keep to my routine and stay positive.”

Apart from players in the region, Qualifying School also welcomes players from across the globe, with the likes of Guatemalan Jose Rolz and Juan Ignacio Lizarralde of Uruguay also eyeing coveted spots on the 2016 Asian Tour.

“I have heard a lot of good stuff on the Asian Tour and I know there are a lot of good players out here,” said the 24-year-old Rolz, who was one of four players who topped the leaderboard at the First Stage held at Springfield Royal Country Club last week. “There are a lot of exposure and opportunities out here, as well, which was why I decided to come here and try it out after turning professional six months ago.

“I feel like I’m out on an adventure coming to this part of the world on my own. [My] game’s getting along very nicely for the last three weeks. I am really excited for the week ahead. I will try my best to secure my card this week.”

Lizarralde, who is enjoying the company of good friend Rolz in what is his second attempt at Qualifying School, said: “I am very happy to make it through the first stage. It has been really fun. It’s great that I get to practice with my good friend Jose [Rolz]. We are staying together and I’m looking forward to a great week ahead.”

“The competition is better and the prize purses are bigger in Asia,” added the 36-year-old Uruguayan, who turned professional in 2007. “You get a lot of playing opportunities here. I was playing at home and I thought my game was improving. I wanted to go somewhere different to get my game going and I knew I had to come to Asia.”

All Qualifying School entrants will be eligible to compete on the burgeoning Asian Development Tour, which was inaugurated in 2010 as a gateway to the Asian Tour. The secondary circuit staged a record total of 28 tournaments in the 2014 season.

Beautifully maintained, the Springfield Royal Country Club presents the golfer with a wonderful, 27 beautifully designed, landscaped holes – each challenges your senses of aesthetics as well as your golfing…