The protected eagle habitats dotting the Pacific Northwest are popular among tourists and bird watchers.

Snoqualmie Ridge, site of this week’s Boeing Classic, is a favorite stop on the Champions Tour. The views are stunning, on and off the golf course. The layout enhances the backdrop of the Cascades and turns 18 holes of golf into a visually enticing experience. It’s not quite to the point of distracting the best senior golfers, but close.

“There are a lot of beautiful holes,” said Bernhard Langer, winner of the Boeing Classic in 2010.

“It’s one of Jack’s courses and I like his golf courses,” Mediate said. “He did a great job on this piece of ground. I love the up and down and sideways, side hills and stuff. I like mountain courses. It’s good stuff.”

“The golf course is great,” Mike Goodes said at last year’s tournament, where he opened with an 8-under 64. “I think all the players love it.”

And this from Kenny Perry, an eight-time winner on the Champions Tour, including the recent 3M Championship: “One of my favorite places to come in the world. I love the golf course. It’s a big golf course. I think it favors a power hitter.”

Perry is among the Champions Tour’s big hitters. So is Fred Couples, the Seattle native who has his sights on finally winning in his hometown. Couples has finished third twice at the Boeing Classic. The key to TPC Snoqualmie Ridge, Couples said, is taming the par-3 holes.

“They’re brutal,” Couples said. “Really, really hard. The ninth and 17th holes are, in my opinion, as good as any par 3s we play all year… The ninth is like the 12th at Augusta National, except it’s 30 yards longer. The ninth hole is unbelievable.

“The par 5s are where everyone thinks you score, but I’m telling you if you look at some bad rounds here, you’ll look and someone will play the par 3s a couple over par.”

Langer has demonstrated his ability to play well at TPC Snoqualmie Ridge. He agrees with Couples’ assessment—to a point.

“It’s more than the par 5s,” Langer said. “Really, it’s everything. You’ve got to drive it well, you’ve got to hit some precise irons and have a very good short game on top of it.”

Langer is hard-pressed to pick a favorite hole.

“No. 17 is pretty nice,” he said. “No. 18 is a good hole with a big grandstand all around, arena-type finish … No. 14 is beautiful but the 13th tee shot when you look down and see the waterfall, that’s pretty cool. There are a lot of great views, so I hate to pick one hole. Coming from Florida, it’s nice to look out and see all these peaks. Nice change.”

Although the Golden Bear does not like to designate signature holes (“I believe I was hired to design 18 signature holes,” he has said for many years), Hole No. 14 is considered by many to be a signature hole at TPC Snoqualmie Ridge and among the most exciting on the Champions Tour. It’s also a sanctuary for eagles of another kind.

At 431 yards, the 14th features a 70-foot drop from the tee over Bear Canyon, making it a drivable par 4. Since 2005, the first year the event was played at TPC Snoqualmie Ridge, the Champions Tour golfers have registered 23 eagles. Nineteen different players have accounted for an eagle 2. The Boeing Classic winner has played the hole under par seven times in 10 tournaments.

The two front-nine par 3s are the sixth and ninth holes. Both measure 207 yards. The 13th hole measures 210, one yard shorter than the 17th. The finishing hole mentioned by Langer is a 498-yard par 5. It is where Scott Dunlap made a two-putt birdie on the first playoff hole last year to defeat Mark Brooks. Dunlap hit a 3-wood second shot to within 5 feet.

Brooks birdied six of the last seven holes, including an 8-foot birdie putt on the 18th in regulation to force the extra hole.

There is another interesting sidelight to the tournament. TPC Snoqualmie Ridge produces close contests. Playoffs have been required to determine a winner five times, including last year with Joe Durant.

The seven-man playoff in 2007 remains the largest ever in a PGA Tour-sanctioned event. Denis Watson won with an eagle—of course—on the second extra hole. The others in the playoff were Gil Morgan, Joe Ozaki, R.W. Eaks, Craig Stadler, Dana Quigley and David Eger.

TPC Snoqualmie Ridge adds yet another chapter to the Golden Bear’s legacy of creating some of the world’s finest tournament venues. Including the 2015 season, no fewer than 140 Nicklaus courses have hosted almost 900 professional tournaments or national amateur championships. 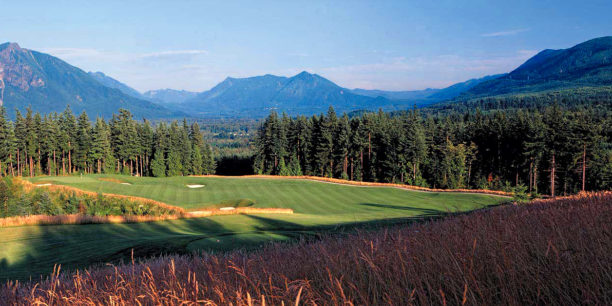 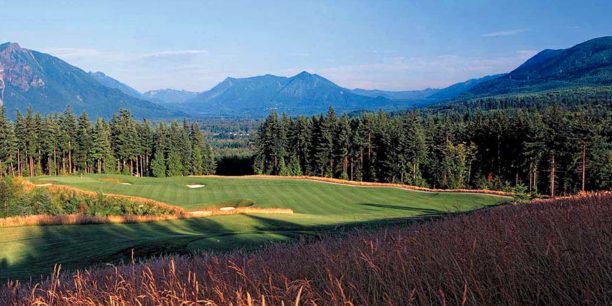