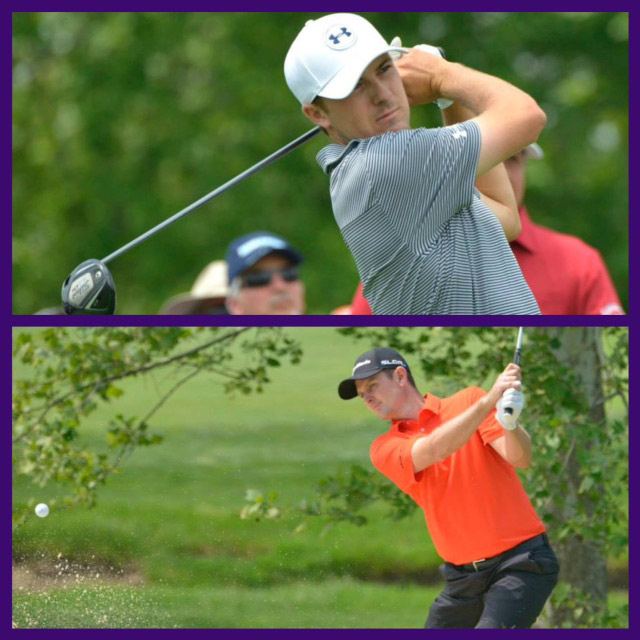 Jordan Spieth (top) and Justin Rose at the 2014 Memorial Tournament

Dublin, Ohio – Officials of the Memorial Tournament presented by Nationwide announced today that the Tournament has accepted the commitment of Jordan Spieth, one of the best young players in professional golf and newly minted Masters Champion, to compete in the 40th edition of the Memorial June 1-7 at world-renowned Muirfield Village Golf Club.

The Memorial has also accepted the commitment of seven-time PGA Tour winner and 2013 U.S. Open Champion Justin Rose, who won the 2010 Memorial Tournament.

“I am delighted that Jordan and Justin are going to be part of a Memorial field that is shaping up to once again be among the strongest in golf,” said Memorial Tournament founder and host Jack Nicklaus. “Justin is one of today’s stars of the game, and we are proud that he is a past winner of the Memorial Tournament. He has become a great ambassador for his country and the game of golf.

“As I told Jordan after his Masters win, his victory at Augusta National was one of the more incredible performances I have seen. Jordan, at age 21, is mature beyond his years, as both a player and person. He has shown remarkable consistency, with 24 top-10 finishes in just three years on Tour. Jordan handles himself tremendously on and off the golf course, and is a wonderful representative of our game today and for many years to come.”

Spieth burst onto the PGA Tour in 2013 and recorded one of the top rookie performances in Tour history, culminating with a selection to the U.S. Presidents Cup Team at Muirfield Village Golf Club. The 21-year-old Texas native recorded nine top-10 finishes during his rookie campaign, including his first-career PGA Tour victory at the John Deere Classic. Spieth continued his inspired play last season, posting runner up finishes at the Hyundai Tournament of Champions and the Masters Tournament for a total of eight top-10 outings. Spieth has elevated his play to new heights in the 2014-2015 season, recording his second career PGA TOUR victory at the Valspar Championship and first major championship title at last month’s Masters Tournament. He has posted two second place finishes to go with those victories and has a total of seven top-10s to date. Spieth currently sits a career-high No. 2 in the Official World Golf Ranking and No. 1 in FedExCup standings and scoring average at 69.252. He also sits atop the current money list with more than $5.1 million to go with career earnings of $13,396,387.

This will be Spieth’s third straight Memorial Tournament appearance. He finished inside the top-20 for the first time last year when he tied for 19th, improving his Tournament scoring average to 72.25 and increasing his earnings to $78,443.78.

Rose, 34, will make his 11th start at this year’s Memorial, where he is ranked fifth on the Tournament’s career money list with $2,198,620, and ninth in scoring average with 71.24. Rose recorded his fifth top-10 finish, a T-8, at Muirfield Village Golf Club in 2013 but failed to make the cut last year after opening rounds of 73-72. A resident of London, England, Rose has recorded seven career PGA TOUR victories, his most recent win coming last month at the Zurich Classic of New Orleans. He has posted two top-10 finishes in the 2014-15 season, adding a runner-up effort to Spieth at the Masters. He is currently ranked No. 6 in the Official World Golf ranking and No. 15 in FedExCup points to go with career PGA TOUR earnings of $31,542,356.