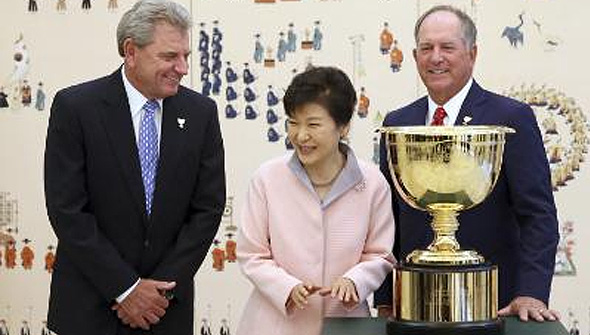 The PGA Tour recently announced that Korean President Park Geun-hye has accepted the invitation to be Honorary Chairperson of The Presidents Cup 2015, when the competition will be played in Asia for the first time in history at Jack Nicklaus Golf Club Korea. President Park officially accepted the role while hosting International Team Captain Nick Price, International Team Vice-Captain K.J. Choi, U.S. Team Captain Jay Haas and PGA Tour Commissioner Tim Finchem at The Blue House—the executive office and official residence of the president of Korea, located in Seoul.

President Park is part of a distinguished group of 10 world leaders who have held the position at The Presidents Cup; she is preceded by President Barack Obama, the 44th President of the United States of America, who served as Honorary Chairman for the 2013 event at Jack Nicklaus-designed Muirfield Village Golf Club, outside of Columbus, Ohio. President Park is the second woman to serve in the role, as Australian Prime Minister Julia Gillard was Honorary Chairperson for The Presidents Cup 2011.

“We are truly honored that President Park has accepted our invitation to be Honorary Chairperson of The Presidents Cup in October 2015,” Finchem said. “Since this marks the first time that The Presidents Cup will be contested in Asia, her official support serves as an incredible endorsement in an important and historic moment in The Presidents Cup history and that of the sporting culture of Korea. President Park’s graciousness in continuing the long-standing tradition of world leaders’ support of the event will further enhance what promises to be the most successful Presidents Cup yet.”

The Presidents Cup 2015 will be held October 6–11 when the biennial competition makes its first trip to Asia. Jack Nicklaus Golf Club Korea will be the fourth international venue to host The Presidents Cup, joining The Royal Melbourne Golf Club in Melbourne, Victoria, Australia (1998, 2011); The Links at Fancourt, George, South Africa (2003); and The Royal Montreal Golf Club in Montreal, Quebec, Canada (2007). The event is projected to be broadcast in 225 countries and territories, reaching more than 1 billion homes in 30 different languages around the world.

Jack Nicklaus Golf Club Korea is the first and only golf club in Korea to carry the name of the Golden Bear himself. Its dramatic parkland, links and rock formation styles are in perfect harmony with the panoramic views of Incheon Bay and the skyline of the Songdo International Business District. At 7,413 yards from the tournament tees, the par-72 Jack Nicklaus Signature Golf Course features unique fairway routings, a variety of tee locations, and greens protected by strategically located bunkers and hazards that provide special challenge to golfers of all levels. In 2010 and 2011, the course hosted the Champions Tour’s Songdo Championship event, becoming the first full-field PGA Tour event in Asia.