The magnificently manicured Steyn City golf course would love to host high-profile tournaments in the near future, but it is not high on their list of priorities.

The Jack Nicklaus-designed layout, a par 72 over 7,000 metres from the championship tees with 73 strategically placed bunkers lying in wait, was launched to the media this week, and by all accounts certainly has the credentials to host big tournaments.

Situated along the Jukseki River between William Nicol Drive and Cedar Road, attention to detail is the buzzword, from the innovative clubhouse to the extravagant locker rooms, and lush layout.

“Hosting big tournaments is not the be-all and end-all,” admitted Ken Payet, general manager of the Steyn City golf course.

“We would obviously love to host co-sanctioned events and get worldwide exposure, but our priority is to get the golf course and surrounding areas on the estate to the kind of level that will blow people away,” he added yesterday.

“Our intentions are to be able to secure a big tournament in the future … not just any tournament, but the right tournament.”

Construction on the golf course started in 2009 on the disused granite quarry. The greens and tees are planted with Bentgrass and the fairways and rough with cool season fescue/rye grass to ensure a green playing surface all year round.

Unfortunately, not everyone will be able to test their skills on the spectacular layout, though.

“Homeowners will become members, and they can invite people to play the course on a monthly basis.

“Our official launch is only in March next year. Up until then we will use the golf course for internal promotions, and golf days,” said Payet.

There are a number of golf courses you must tick off your bucket list.

This is certainly one of them, provided you crack the nod. 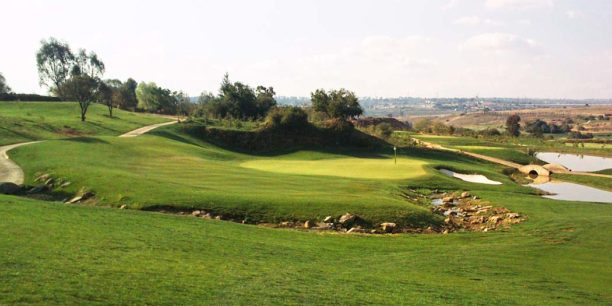 Going from a quarry to an iconic golf course (The Pretoria News, October 17, 2014)