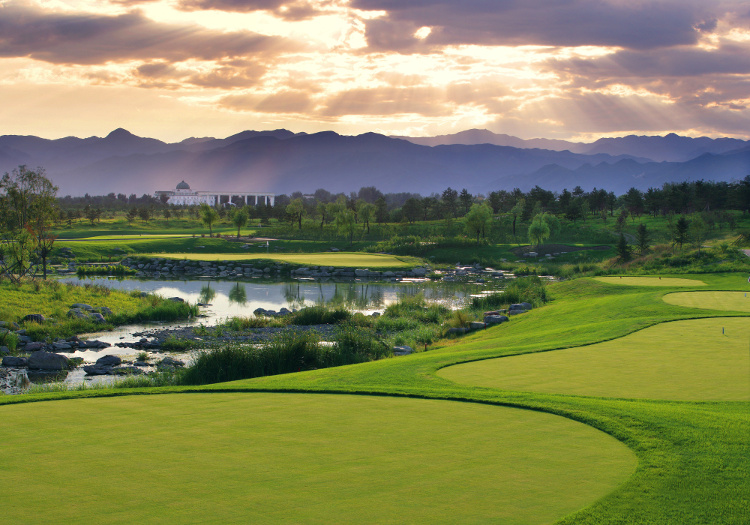 Two rounds have been completed at the Reignwood LPGA Classic, held at the Jack Nicklaus and Jack Nicklaus II co-designed course at Reignwood Pine Valley Golf Club in Nankou, Beijing, China. The tournament marks the first week of the LPGA’s Asian swing, and at the end of both days, World No. 1 Stacy Lewis has sat atop the leader board.

Lewis has dominated the field on the 6,596-yard course with rounds of 66 and 68 to sit two shots ahead of fellow Texas native and good friend Brittany Lang.

“I never back down from a challenge,” Lewis said. “That’s why I’m here. More than anything, it’s an opportunity to win. It’s a golf course I played really well on last year, and I feel like I’ll have a good shot again this year.”

Lewis lost by the thinnest of margins a year ago to 24-year old Guangzhou native Shanshan Feng in the first-ever Reignwood LPGA Classic. She came to the 18th hole with a one-shot lead over Feng. Lewis laid up on the 495-yard par-5 finishing hole, only to watch Feng’s second shot rattle off the flagstick and come to rest three feet from the hole for a potential eagle and sending the Beijing crowd into a greenside frenzy.

Lewis then missed her 18-foot birdie putt, and the local hero drained the eagle putt to take her first win of the 2013 season. Last year’s inaugural Reignwood LPGA Classic was the LPGA’s first trip back to China since 2008—a return to a country where golf has exploded in popularity and where Nicklaus Design has 26 courses open for play and another 20 under development. The Pine Valley co-design by Jack Nicklaus and Jack Nicklaus II opened for play in 2007. The Jack Nicklaus Signature Golf Course at Pine Valley is currently being renovated by the Golden Bear, who will be visiting China this month to work on the layout.

Lewis is playing aggressively and putting well on the course this week, which means it’s most likely a race for second place for the rest of the field. If she can hang on to the lead, the current World No. 1 will win 500 points in the race to the CME Globe and carve out her share of a $2.1 million purse.

“I’ve had good speed all week,” she said. “Just had a lot of tap-ins, even when they’re not going in.”

Currently in second place with a total score of 136, LPGA star Brittany Lang said, “We’re really good friends, though, and I have a lot of respect for her on the golf course.

“Yeah, definitely going to be out of my element, a little intimidated. She’s a great player. But at the same time, I’m trying to get better, too. So playing with her, watching her, and trying to play well and do my thing is going to make me better. If I could play with her on more weekends, then I’ll be doing pretty good. Maybe I can learn something from watching her.”

It is a competition, but Lewis is happy that her friend has found herself in this position again.

“She hasn’t really played her best at times this year, so it’s good to see her playing some good golf,” Lewis said. “It’s always fun playing with her.”

The last time Lang came to the course on Saturday in this good of a position was her only LPGA win at the 2012 Manulife Financial LPGA Classic, when she was also in second at the start of the third round.

“I haven’t [been in that position in a while], so I’m looking forward to gaining a little more experience.” Lang said. “It has been a while since I’ve been in that position. You know, I’m just working on a few different things. Just trying to have a good attitude and enjoy myself out there, and just a few other process goals.”

Playing with Lewis, she will have a lot of eyes on her but she is ready for it.

“I think it’ll be good experience this weekend to make sure when the excitement hits to really pull myself back.” Lang said of handling the pressure. “You got to keep working on it if you want to be one of the great players out here.”

All the action at the Reignwood LPGA Classic can be seen on Golf Channel this week. It airs Friday and Saturday from 11:00 p.m. to 4:00 a.m. ET.