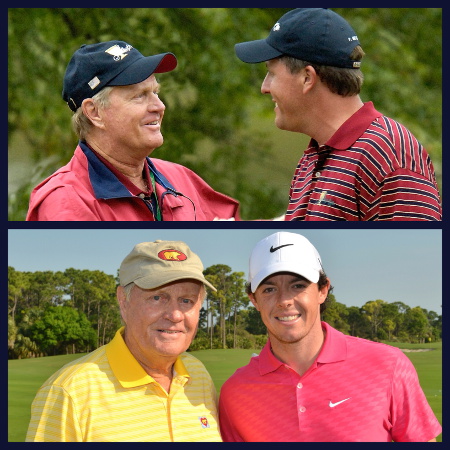 Dublin, Ohio — Officials of the Memorial Tournament presented by Nationwide Insurance announced today that the Tournament has accepted the commitments of two of the top names in professional golf to compete in this year’s Memorial: five-time major championship winner and reigning British Open champion Phil Mickelson and former U.S. Open and PGA Championship winner Rory McIlroy.

The Memorial Tournament presented by Nationwide Insurance is May 26–June 1 at world-renowned Muirfield Village Golf Club.

“I had the opportunity to talk to Phil during the Champions Dinner at the Masters Tournament, and he said he looked forward to a return to Muirfield Village Golf Club after playing in The Presidents Cup last fall,” said Tournament founder and host Jack Nicklaus. “Phil is one of the most popular players in the game, and he’s shown over the years that he can win anywhere. His win at Muirfield last year in the British Open was impressive. Perhaps he can now add a victory at Muirfield Village Golf Club to his résumé.”

Mickelson, 43, will be making his 13th start at this year’s Memorial. His first appearance came in 1991 as an amateur where he finished tied for 66th place. In his last eight starts at the Memorial, dating to 1999, Mickelson has finished in the top-20 seven times. In the other two he withdrew due to injuries. His Memorial Tournament scoring average at Muirfield Village Golf Club is 71.51, with his best finish a T-4 outing in 2006. The World Golf Hall of Fame member has career earnings in the Memorial of $832,002.66. Through 10 starts in the 2013–2014 season the Rancho Santa Fe, California, resident has recorded five top-20 finishes. Mickelson is currently ranked No. 9 in the Official World Golf Ranking and is 84th in FedExCup standings.

McIlroy, 24, has enjoyed tremendous success since bursting onto the U.S. scene in 2010. The Northern Ireland native enjoyed a career year in 2012 in which he recorded 10 top-10 finishes over 16 starts, including four victories and his second major at the PGA Championship. His first major championship came in 2011 at the U.S. Open at Congressional Country Club in Bethesda, Md. McIlroy’s 2012 campaign also included a showering of awards, chief among them PGA TOUR Player of the Year, which is known as the Jack Nicklaus Award, and PGA Player of the Year, the Byron Nelson Award and Vardon Trophy for lowest scoring average, and the Arnold Palmer Award as the leading money winner with $8,047,952. A resident of Jupiter, Fla., McIlroy has competed in six TOUR events in the 2013–2014 season and recorded four top-10 finishes. He is No. 11 in the Official World Golf Ranking and No. 45 in FedExCup points as he searches for his seventh career PGA TOUR victory. McIlroy has two top-10 finishes at the Memorial Tournament in his four previous appearances. His best finish was a fifth place outing in 2011. Last year he finished T-57 at Muirfield Village after an opening round of 78. His Memorial Tournament scoring average is 71.43 with career earnings of $417,702.

“I have been a fan of Rory’s for several years, and he remains one of the top young talents in our game today,” said Nicklaus. “I think very highly of him as a golfer and a person. He is a two-time major champion, a former No. 1 in the world, and a PGA TOUR Player of the Year. And yet he is only 25 in a few days [May 4]. Rory has a world of talent, and I know our Memorial Tournament fans join me in welcoming Rory back to Muirfield Village Golf Club.”

“We saw the success of the Captain’s Club venue at the Presidents Cup and felt it was the right time to introduce a similar venue for the Memorial,” said Dan Sullivan, executive director of the Memorial Tournament. “Individual patrons will now have an opportunity to gain access to a premium location on the golf course. With the addition of Cameron Mitchell food offerings in a sports bar atmosphere, I know our patrons will enjoy the area.”

All-week Patron Badges to the 2014 Memorial Tournament presented by Nationwide Insurance are available to the general public. The badges, valid May 26 – June 1, cost $165 and include three complimentary any-day Practice Round tickets at no extra cost. As always, kids 12 and under can attend for free, and kids 18 and under are admitted free on Wednesday for Junior Golf Day with a ticketed adult. The public may call the Tournament Ticket Office 9 a.m.–5 p.m. weekdays at 877-MT BADGE or visit www.mtbadge.com to purchase badges. Daily tickets for Monday, Tuesday and Wednesday practice rounds are also available. The cost is $35, and they are valid for all three practice-round days.

The 2014 Memorial Tournament presented by Nationwide Insurance Schedule of Events

*All times subject to change

About the Memorial Tournament presented by Nationwide Insurance

The Memorial Tournament presented by Nationwide Insurance is held annually at Muirfield Village Golf Club in Dublin, Ohio, a suburb of Columbus. The Tournament, founded and hosted by Jack Nicklaus, is conducted each year with three goals in mind: to honor the memory of individuals living and deceased who have distinguished themselves in the game of golf; to showcase the world’s best golfers competing on one of the most challenging venues in the world for the enjoyment of spectators; and to benefit many Greater Columbus Charities in alliance with the Nicklaus Children’s Healthcare Foundation, Nationwide Children’s and numerous other local organizations. For more information, visit www.thememorialtournament.com or call 614-889-6700.

Nationwide Mutual Insurance Company, a Fortune 100 company based in Columbus, Ohio, is one of the largest and strongest diversified insurance and financial services organizations in the U.S. and is rated A+ by both A.M. Best and Standard & Poor’s. The company provides a full range of insurance and financial services, including auto insurance, homeowners, pet, motorcycle, boat, farm, commercial insurance, life insurance, annuities, mutual funds, public and private sector retirement plans, banking, mortgages, and specialty health services. For more information, visit www.nationwide.com.