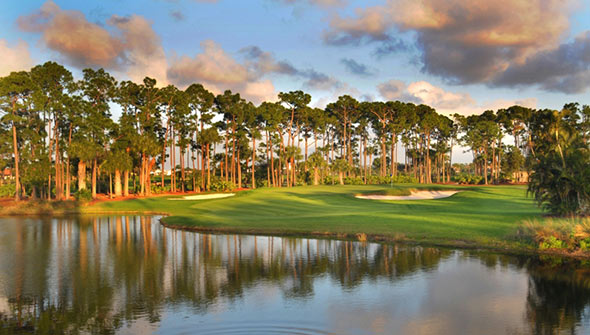 PGA National has always been a special place in the golf world.

Taking up a big plot amidst West Palm Beach, the resort sits a good driver’s distance from the PGA’s U.S. headquarters. While the business of golf is shaped from that business HQ, thousands of players flock to PGA National to sample five elite courses designed by some of the greatest names in the sport.

The resort recently underwent a $100 million dollar renovation to keep it at the top of West Palm’s resort scene. The guest rooms were upgraded, the dining areas modernized and the spa greatly expanded.

In the aftermath of those improvements, PGA National now includes the Ironwood Steak and Seafood (the gourmet entry), IBAR (a popular gathering spot), Palm Terrace (best for breakfast), Bar 91 (sports themed for quick dining) and Waters of the World Cafe (Poolside).

The Spa at PGA National includes all the expected services for men and women. The star of the attraction is the Club Acquaterra with its multiple soaking pools designed to simulate waters around the world.

All that’s well and good, but I didn’t come to PGA National to enjoy the pool or smell essential oils. I was there to play golf. Fortunately, there are five legit courses surrounding the resort, including The Palmer (designed by Arnold himself), The Fazio (a tribute to Walter Hagen designed by George and Tom Fazio), The Squire (also designed by the Fazio’s) and The Estates (designed by Karl Litten),

The star of the show is Champion – an 18 hole championship course designed by Jack Nicklaus that serves as home for the annual Honda Classic. Challenging while encouraging, an average mid-handicap golfer can enjoy a round at Champion with its conservative use of trees and wide fairways.

The course builds to the back nine as Nicklaus laid the holes out hoping to build to a big finish — with the 17th separating the men from the boys. That’s The Bear Trap – marked with a sign and statue honoring Nicklaus. With a green that defies you to drop your pellet in good position inside regulation, you have no choice on approach but to grip and rip and hope for the best.

To expedite my press round the morning I played Champion, I went out on the back nine first. So, I faced the Bear Trap earlier in my game than PGA players would need to in tournament play. I would finish on 9. I found myself about 175 out on approach. I hit the seven iron of the day, putting it on the center of the green. Drop the mike. That’s the shot of the day — and a shot like that on Champion at PGA National is a reason to keep playing golf for years to come.

There’s genius in the design of Champion and its place within the Palm Beach terrain. The grasses used combine with the climate to forge, in essence, two golf courses in one. While never easy to play, Champion is friendlier and more accessible to medium-high handicappers from autumn through winter — peak times for Florida resort and gold tourism.

However, come spring and the return of the PGA tour, the increase n temperatures thicken the grass and up the wind speed enough to tighten playing conditions — forging a course that only the best in the world can master.

The PGA National grounds also house The David Leadbetter Golf Academy – one of the world’s most esteemed golf schools. I was treated to a session with school pro Matt Denzer. Rather than just goof around during my lesson, I wanted to get some practical use out of this opportunity. I asked Denzer to help me fend off a slice that had been plaguing me off the tee. I’d always had a little bit of a fade with my driver, but I was damn near hitting boomerang balls as of late with my slice carving about 50 yards off many of my drives.

Using a combination of a coach’s eye and video analysis, Denzer and I figured out I was sliding in my backswing — loading up the club too heavily for my hip to release on address. So, I was still very closed at ball strike — my shoulders way behind where they needed to be. I wasn’t slicing the ball. I was pushing it right, and the ball was going where I hit it.

By focusing on keeping my head still and my shoulders level immediately in my backswing, I was able to carve some of the angle off that slice. Was I entirely cured? No. It’ll take more practice time than could be packed into a Leadbetter lesson, but the analysis was swift and the treatment aggressive.

PGA National exists to offer the golfer choices he or she is unlikely to find in such abundance elsewhere in the world. From rounds on five outstanding courses to opportunities to improve one’s game — from multiple restaurants to a variety of spa experiences — the resort can provide great golf memories, or let you forget about the game altogether.