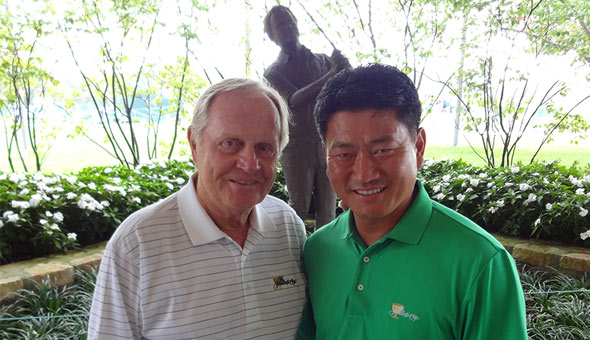 Nicklaus-designed Muirfield Village Golf Club in Dublin, Ohio, outside of Columbus, last month became the only course in the world to have hosted the Solheim Cup, the Ryder Cup, and The Presidents Cup. Now begins another run of sorts for the Golden Bear. Following the Ryder Cup being played in 2014 on the Jack Nicklaus-designed PGA Centenary Course at Gleneagles in Scotland, The Presidents Cup in 2015 will be staged in Songdo International Business District in Incheon, at the Jack Nicklaus Golf Club Korea. The course, which is located 40 miles west of Seoul in the country’s largest economic development zone, celebrated its opening in September 2010 with the Champions Tour’s first official event held in Asia. Jack Nicklaus Golf Club Korea hosted the Songdo Championship in 2010 and 2011, and the 2012 Korea Women’s Open on the KLPGA Tour.

Attending The Presidents Cup at Muirfield Village Golf Club was a large contingent of Korean dignitaries, including a number of staff and representatives from JNGC Korea. What they witnessed was an event that, while played under unseasonably rainy conditions, hosted 180,000 spectators from Central Ohio and nearly every corner of the world—almost double the attendance the last time the matches were held in the U.S. The United States withstood a Sunday rally by the International Team and ultimately clenched their fifth consecutive victory, and eighth since the event was established in 1994.

Nicklaus, a four-time captain of the event, served as an unofficial host at The Presidents Cup, and spoke at the Opening Ceremonies to a sold-out crowd gathered in downtown Columbus. Proceeds from the ticket sales went to Nationwide Children’s Hospital. Outside of his duties as a host, course designer and past captain, the Golden Bear also made an appearance at Nationwide Arena to drop the ceremonial puck at the Columbus Blue Jackets’ NHL season-opener against the Calgary Flames.

Jack also took time to help promote the 2015 Presidents Cup. He hosted a press conference just for the Korean media contingent, filmed a Q&A with popular Korean star and past Memorial Tournament winner K.J. Choi, and hosted a reception for representatives and guests of Jack Nicklaus Golf Club Korea.

The following are excerpts from Jack’s Q&A with Korean media:

Q. Any comments for the Korean golf fans?

Q. What is the difference between Jack Nicklaus Golf Club Korea and other golf courses in Korea?

JACK NICKLAUS: While I don’t know many of the other courses spread across Korea, I can tell you that JNGC Korea and Songdo itself totally created, total reclaimed land from the harbor. But to me, what is truly unique about Jack Nicklaus Golf Club Korea is its location, New Songdo. It is the bridge that was built between Incheon International Airport and Songo itself— access is terrific. The golf course is very compact, great for the gallery. It’s certainly a strong golf course for tournament golf. It’s an excellent venue. The clubhouse and amenities are excellent. It’s a wonderful venue for The Presidents Cup.

Q. The last Presidents Cup two years ago, there were three Koreans, K.J. Choi, Y.E. Yang and Kyungtae Kim, and this year there are no Korean golfers. What do you think about the Korean men’s golf as of today and looking to a couple years later on, hosting The Presidents Cup in their country? Is it a big step up?

K.J. has made it clear—and he feels very strongly—that he wants to play in that Presidents Cup. I’m sure that Y.E. wants to play and I’m sure that Kim wants to play, as well as other players who will come along, too. They will have to qualify like everybody else in the world, or be selected through a captain’s choice, but I would say that it will be pretty difficult not to have one or two Korean players on that team, with the matches being played in Korea. I can’t imagine that not happening.

You know, I played a lot of golf with K.J. He is a former Memorial Tournament winner, and he’s always been a great player and a great person. That’s among the many reasons I was flattered and honored to contribute to his recent autobiography. I’ve always enjoyed playing with K.J. and being with him.

I have never played with Y.E. but I know he is a wonderful player and, of course, a major champion.

Q. In two years from now, what do you picture for Korean females, males, the golf as of today, the Korean power of golf?

JACK NICKLAUS: Well, with the women, it’s obviously been quite strong. There are a lot of very, very, good female Korean golfers. But I think there are also a fair number of men that are very talented golfers. But you know, the men haven’t enjoyed quite the level of success the women have. The women have dominated the ladies tour, the LPGA. So, I would think that would be pretty difficult for the men to do.

I think if you look at the Asian golfers that have played on the American Tour, you’ve had a handful of golfers who have played and enjoyed success. Japan has had a couple. China has had one or two here and there. There are very few other golfers on the American Tour from Southeast Asia and from Asia. So when you look at the representation from an entire continent, I think Korea has done pretty well from that standpoint.

Q. Is there anything you wish to tell them that would help them improve?

At Jack Nicklaus Golf Club Korea, we created everything there, much like a Florida golf course. There’s a flat piece of ground, so we created all the hills, the valleys, and all of the features. I think both golf courses are excellent golf courses in their own right. I think some people will think that Muirfield Village is better, and some people will think that Jack Nicklaus Golf Club Korea is better.

I think people will like them both, and I think that’s why we do different golf courses, because everybody’s got a different opinion on what they like.

Q. In two years, Incheon, Korea will host The Presidents Cup, and they don’t have any experience in Korea for this type of world event. Do you have any tips to share?

JACK NICKLAUS: Even though we had experience with hosting 38 Memorial Tournaments, the PGA TOUR extended their additional experience and guidance. They will do what they think is the right thing to do for the event in 2015. Korea does not have to worry about not having the experience to host an international event.

Q. K.J. started golf after reading your teaching book. He tells all his fans that you are the No. 1 in the world and that you are a legend. Could you tell them how to play golf?

JACK NICKLAUS: I would think since K.J. learned from me, maybe just go watch K.J. (laughing) since I don’t play anymore.

Well, I think that it’s very difficult to learn golf from a book. You can get fundamentals from a book, but work and effort and discipline are the tools K.J. used to get to his level. I may have provided him some fundamentals but K.J. did most of it on his own. I think no matter what sport you play, it takes discipline and hard work.

Q. You stepped out of competition, but you’ve been in The Ryder Cup and Presidents Cup. Do you miss it at times?

JACK NICKLAUS: I played my golf. I enjoyed the time that I played very much. I love playing, but at certain times in people’s lives, their skills erode. A lot of athletes have had a hard time leaving their sport. I really haven’t had a hard time. I’ve been very fortunate that golf was not my whole life.

Q. How is your golf game these days?

JACK NICKLAUS: I have not played individually. I played a scramble about two weeks ago. It’s the first time I’ve played since May. So I play maybe 10 times a year. No practice, that’s it. And I would say that if I played 10 rounds, I would shoot—and keep in mind that I play from the members’ tees now—between 68 and 78.

I wouldn’t win any tournaments shooting that.