Practice round tickets are still available for $44 per day

DUBLIN, Ohio (September 26, 2013) – With less than one week remaining until the Opening Ceremony and Celebration of The Presidents Cup, tournament officials have announced that weekly tickets are officially sold out. Limited tickets to The Presidents Cup practice rounds – Tuesday, October 1, and Wednesday, October 2 – are still available for only $44 each.

Practice round tickets are available via www.presidentscup.com or by calling 888-401-8000. As a reminder, youth 12 and under are admitted free to The Presidents Cup (grounds access only) with a ticketed adult.

“The overwhelming response by ticket buyers is an example of the tremendous support The Presidents Cup has received, both from the Dublin-Columbus region and from golf fans around the world,” said The Presidents Cup Executive Director Matt Kamienski. “The sellout is an indicator of the global growth in popularity of this event. We are excited for fans to experience all the thrilling action of The Presidents Cup at Muirfield Village Golf Club in just a few days.”

Weekly tickets were capped at 35,000 spectators per day.

“Strong backing from the entire central Ohio region, both individuals and corporations, played a major role in propelling the tournament to its sold-out status,” said Dan Sullivan, The Presidents Cup tournament director. “As the excitement builds towards Wednesday’s Opening Ceremony – which sold out just two weeks after it was announced – that support will be on display and lead to a week that all within the community will be able to enjoy.”

Fans are reminded that all general parking for The Presidents Cup is located at the Columbus Zoo and Aquarium. A continuous shuttle service will be offered daily beginning 30 minutes before gates are scheduled to be open until a minimum of one hour after play has concluded. The Zoo is located at 4850 Powell Road and is accessible off Riverside Drive or Sawmill Road.

Additionally, fans are reminded that no ticket is needed for The Presidents Cup Fan Experience, which offers fans and local residents a place to enjoy food and beverages, entertainment, shopping and a variety of interactive displays throughout tournament week. The Presidents Cup Fan Experience is located on approximately 3 acres just outside the main gates at Muirfield Village Golf Club and is open to the public, with no ticket required.

The Presidents Cup, a team, match-play competition featuring 24 of the world’s top golfers – 12 from the United States and 12 from around the world, excluding Europe – is held every two years, and since 1996 has alternated between United States and international venues. The Presidents Cup was developed to give the world’s best non-European players an opportunity to compete in international team match-play competition. The U.S. Team has won seven of the nine previous Presidents Cups, and the only win by the International Team came at the 1998 event in Melbourne. The Presidents Cup 2003 ended in a tie. Fred Couples is returning as U.S. Team captain in 2013, and fellow World Golf Hall of Fame member Nick Price will lead the International Team. 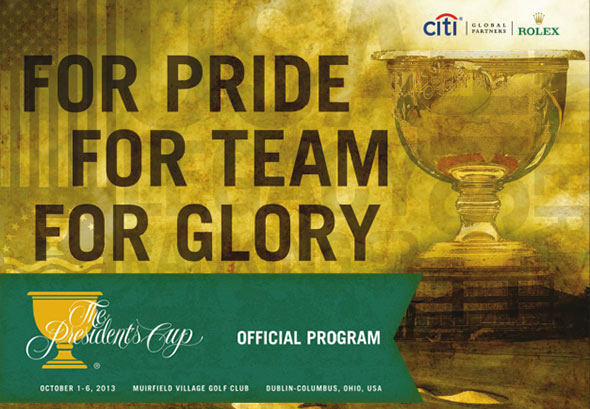