The Web.com Tour takes to The Ohio State University’s Scarlet Course this week with the Nationwide Children’s Championship. The course has previously been home to OSU alumni and golf greats such as the Golden Bear, Tom Weiskopf and John Cook – but this week, 131 PGA TOUR hopefuls will take to the Jack Nicklaus-redesigned layout hoping to secure their Tour cards at the third of four Web.com Tour Finals events.

You can watch the Nationwide Children’s Championship on the Golf Channel Thursday through Saturday from 6:30-8:30 p.m. ET, and on Sunday from 7-9 p.m. ET.

Defending champion Ben Kohles is one of three former Nationwide Children’s champions in the field this week vying for their share of the $1 million purse. With the Finals at its halfway point, the picture for PGA TOUR cards—and priority ranking—begins to take shape. The bulk of the field is made up of players in the top 75 on the Web.com Tour money list, and Nos. 126-200 in the PGA Tour’s FedEx Cup standings. The top 25 on the Web.com money list are assured PGA Tour cards for the 2013-14 season, while the other players are fighting for 25 additional cards through earnings in the Finals.

The Scarlet course, ranked No. 4 in Links Magazine’s list of the Top 25 College Golf Courses and also included in Golf Digest’s 2013-14 list of the Top Ohio Courses, was designed by the late Dr. Alister MacKenzie, the legendary golf course architect. The Scarlet was completed in 1938—four years after MacKenzie’s passing—by his design protegees. At the time, only a handful of universities had golf facilities and most of those were eastern schools, allowing Ohio State to quickly become synonymous with collegiate golf.

Nicklaus virtually donated his design services to update the Scarlet design in 2006, agreeing to accept a $1 fee for the work.”My experience as a student at Ohio State was wonderful,” Jack Nicklaus said. “The opportunity to come back so many years later and to give back was a real pleasure and something I wanted to do. It was very meaningful to me and was a lot of fun. It was a real thrill for me to be involved.”

Nicklaus concentrated on restoring the course to the way MacKenzie originally intended it to play. The bunkers were redesigned to appear more like the classic MacKenzie designs at his numerous other courses—but became appropriately labeled “Nickenzie” bunkers. The course was also lengthened to play more than 7,400 yards and the par was changed to 71. The driving range was also enlarged and a short-game practice area was built for both of the varsity golf teams, as well as another one for the members of the club. 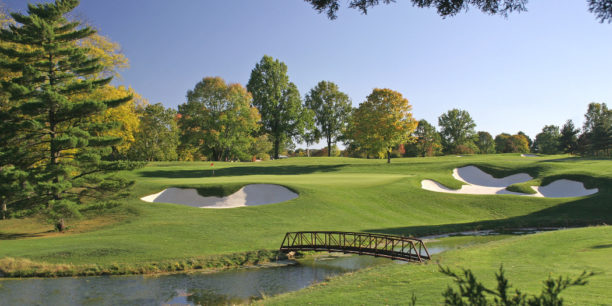