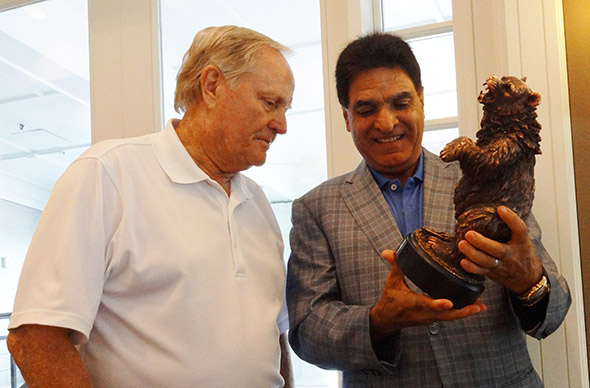 Jack Nicklaus has more PGA major championships than any player in history. His count stands at 18.

On July 31, the 73-year-old Nicklaus was making his way to Akron to accept the 2013 Ambassador of Golf award from the Northern Ohio Golf Charities. The award is presented each year to the person who has fostered the ideals of the game at an international level.

In a first for any previous honoree, Nicklaus had to be at Firestone Country Club in Akron at 5:30 p.m. for public recognition on the first tee prior to the private reception.

He had a short window of opportunity, but took the time to stop by Barrington Golf Club in Aurora to talk with officials and club professionals about the course he designed. The local club opened in 1994.

Nicklaus traveled with club officials around the entire 18 holes to make suggestions to keep the game at Barrington competitive. He took his time driving an open-air cart around the course, stopping to point out potential improvements and changes.

Smiling and waving at the few people around him, Nicklaus seemed to be in his element, talking about golf course redesign and the game he loves.

Following the tour of the course between 10 a.m. and 2:30 p.m., Nicklaus made his way upstairs to the clubhouse, where Barrington members officially christened the upstairs eating area the Nicklaus Grille, complete with a stunning plaque on the wall that Nicklaus uncovered.

AFTER A ribbon cutting ceremony and toast, Nicklaus walked over to a wall of pictures of him and talked about each print. He explained what hole he was on and what year the photo was taken, even pointing out he had the same sweater on in two of the photos.

His memory was perfect as he recalled tournament victories and courses played. Nodding toward one picture, Nicklaus said the young Nicklaus in it looked just like his grandson — Nick O’Leary — a standout tight end with the Florida State University football team.

Following an informal chat with members of Barrington, the Golden Bear joined them for lunch in the newly-named Nicklaus Grille before he had to leave for Firestone.

The honors at Firestone came on the eve of the $8.75 million World Golf Championships-Bridgestone Invitational. He was accompanied by his wife Barbara, who won the Ambassador of Golf award in 1990.

During his PGA Tour career, Nicklaus won a total of 73 tournaments, was runnerup 58 times — 19 in majors — and claimed third place 36 times.

Barrington is the only Jack Nicklaus Signature Golf Course in Northeast Ohio. Barrington was acquired by Monte Ahuja, for whom University Hospitals’ Ahuja Medical Center in Beachwood is named, early in 2012. Under his leadership, Barrington’s membership has reached an all-time high and many clubhouse and course improvements have been made.

Jack Nicklaus’ approach to golf course design is one of personal involvement and sensitivity to nature. “When I become involved with a golf course project, my aim is to make…