Golf’s premier international events played on Nicklaus courses in 2013, ’14 and ’15 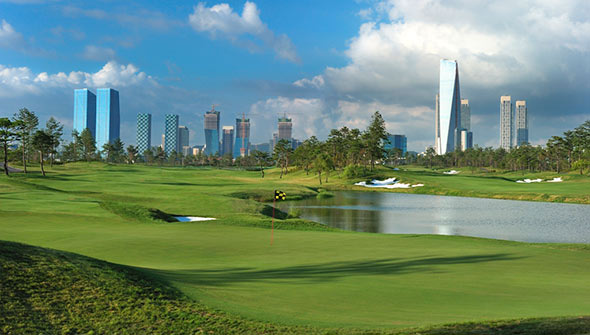 See Also: An Interview with Jack Nicklaus regarding the 2013 Ambassador of Golf Award and the 2015 Presidents Cup at Jack Nicklaus Golf Club Korea

PGA TOUR Commissioner Tim Finchem announced Wednesday evening that Jack Nicklaus Golf Club Korea, located in the Songdo International Business District (IBD), Incheon, Korea, has been selected as the host course and Incheon City as the host city for The Presidents Cup 2015 when the event makes its first trip to Asia. The announcement took place at Firestone Country Club in Akron, Ohio, where Jack Nicklaus on Wednesday received the Ambassador of Golf Award.

Jack Nicklaus Golf Club Korea, which is located 40 miles west of Seoul in the country’s largest economic development zone, celebrated its opening in September 2010 with the Champions Tour’s first official money/official victory event held in Asia. The course hosted the Songdo Championship in 2010 and 2011, and the 2012 Korea Women’s Open on the KLPGA Tour.

Mayor Song Young-Gil of Incheon City expressed his excitement and was delighted with his city being selected as the host city of The Presidents Cup 2015. “We are extremely pleased and honored to be the first city in Asia to be selected as host of The Presidents Cup,” said Mayor Song. “Along with the upcoming 2014 Asian Games, Incheon City has certainly put itself on the global stage as a choice destination for major international events, and we look forward to welcoming participants, sponsors and dignitaries from around the world to our great city and country.

“Incheon City will work closely with the PGA TOUR, Jack Nicklaus Golf Club Korea and others to make The Presidents Cup 2015 a resounding success.”

Nicklaus said, “We’re very honored and proud that Jack Nicklaus Golf Club Korea has been selected for The Presidents Cup 2015. We have always felt strongly about JNGC Korea as a host venue because of its location in the Songdo International Business District, its proximity to the Incheon International Airport, the quality hotels nearby, and the club’s proximity to a large population area. The facility itself also makes for an ideal location to host The Presidents Cup. We’re very pleased that the PGA TOUR felt the same after evaluating its options throughout Korea.

“Everyone has worked extremely hard to get us to today. I want to extend my congratulations to Mayor Song Young-Gil and the host City of Incheon; the membership and staff at Jack Nicklaus Golf Club Korea, as well as the development team from Gale International, especially Stan Gale. I would also like to recognize Chairman Roy Ryu, who has been instrumental in bringing The Presidents Cup to Korea. His vision and leadership were critical throughout the entire selection process. In the end, we’re delighted that the PGA Tour selected the Jack Nicklaus Golf Club Korea. We think they will present a great event. This will be a tremendous opportunity to showcase on a world stage the beauty of Korea and the country’s passion for the game of golf. Having been fortunate to be involved in several Presidents Cup matches in the past, I know how uniquely special this event is and how it represents to a global audience all that is great about the game of golf.”

Jack Nicklaus Golf Club Korea features a par-72, 7,413-yard Signature Golf Course designed by the Golden Bear, and offers world-class amenities, including an award-winning, 60,000-square-foot clubhouse. For The Presidents Cup 2015, the course has undergone some minor renovations and the holes rerouted to accommodate hospitality and the match-play format. Songdo IBD is a joint undertaking by Gale International, POSCO E&C, and Incheon City and a model of international collaboration. Songdo IBD is globally recognized as the world’s foremost smart, sustainable city-scale development. In 2012, the Green Climate Fund (GCF) selected a site in Songdo as the home for the GCF Secretariat. It is believed that many of the sustainable infrastructure and technological innovations being pioneered in Songdo will be applied to GCF-funded projects in developing nations.

“To build a truly global city, we engaged the world’s leading design, architecture, engineering and technology firms,” said Stan Gale, chairman of Gale International and Jack Nicklaus Golf Club Korea, and was in attendance for the announcement. “Working closely with our partner POSCO E&C, we selected Nicklaus Design to create a sporting venue worthy of hosting professional golf’s most prestigious international events. As a direct result of Jack’s consistent leadership and hands-on oversight, the JNGC Korea was selected as The Presidents Cup 2015 host location. The PGA Tour’s decision is emblematic of Incheon City’s global appeal and a reinforcement of the importance of the great game of golf in the Republic of Korea and Greater Asia.”

In 2011, Choi, K.T. Kim and Y.E. Yang competed in The Presidents Cup, marking the first time more than one South Korean qualified for the International Team in event history.