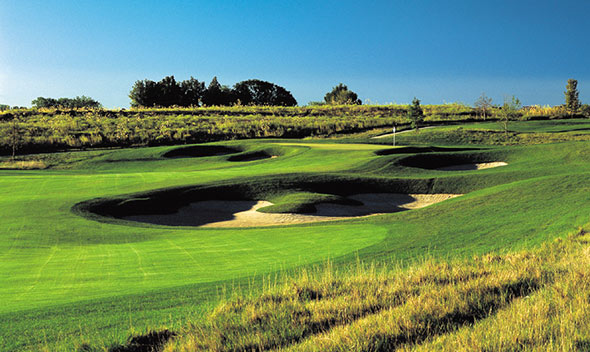 Across the pond from this week’s Open Championship at Muirfield, two events tee off at Jack Nicklaus-designed courses in the U.S. The PGA TOUR’s Sanderson Farms Championship at Annandale Golf Club in Madison, Miss., and the Web.com Tour’s Midwest Classic at the Nicklaus Golf Club at LionsGate outside of Kansas City, Kan., will host a mix of 283 veterans and some of the game’s future stars.

The newly sponsored Sanderson Farms Championship, formerly the True South Classic in 2012 and Viking Classic the previous four years, coincides with the British Open for the first time in its 45-year history. This is the 20th consecutive year Annandale has served as host to the event, and the roster of past winners includes former World No. 1 Luke Donald; 2011 FedEx Cup Champion Bill Haas; and the late Payne Stewart, an 11-time PGA TOUR winner and three-time major champion. Other TOUR stars in the field include 1997 PGA Champion Davis Love III, 2008 Masters winner Trevor Immelman, 2011 Honda Classic winner Rory Sabbatini, and Japanese sensation Ryo Ishikawa. The competitors are vying for a $3 million purse with a $540,000 winner’s share.

PGA TOUR newcomer Casey Wittenberg, who was voted the 2012 Web.com Tour Player of the Year in 2012 after a season that included two wins and eight top-10 finishes in 24 starts, joins the field at Annandale Golf Club. Meanwhile, 156 players hoping to follow in Wittenberg’s footsteps will compete in the Midwest Classic, a Web.com Tour event that comes with the chance to secure one of the first 25 available PGA TOUR cards for 2013-14, as well as a $600,000 purse.

Annandale Golf Club is a par-72 layout that measures 7,202 yards. It became Mississippi’s first world-class championship course in 1981 when it opened for play. The 18-hole Jack Nicklaus Signature Golf Course—again rated No. 1 in Mississippi in Golf Digest’s 2013-14 “Best In State” rankings—blends challenge and enjoyment for golfers of all abilities. Its rolling terrain is distinguished by grassy bunkers reminiscent of Scottish courses. Features of the layout include bentgrass greens, many of them elevated; fairways dotted with pampas grass; and broad lakes.

At the Nicklaus Golf Club at LionsGate, up-and-comers will experience a course that has been adjusted to host the Midwest Classic, with its front-nine playing as the back-nine. The native prairie grass has grown higher and the fairways have been cut to play much more narrow than usual.

“The golf course at LionsGate is outstanding for several reasons, including its beautiful views, rolling fairways, and capability to challenge both the amateur and the seasoned golfer,” Nicklaus said