When you stand on the first tee at the Great Bear Golf Club one thing keeps running through your mind, "Man, I’m glad they did this."

In 1997, Great Bear — the only course in the state designed by Jack Nicklaus that the public has a chance to play (it’s semi-private) — did in fact open as a private club.

But, about 10 years later, membership was dwindling and ownership of the course was taken over by a local bank. Then, a group of the club’s members tried to run the place, but that didn’t work, either. And in 2011 an attempted sale to yet another buyer fell through.

That led to the course being shuttered in 2012 before local businessman Charlie Kirkwood — who also owns the Shawnee Country Club less than four miles away — purchased Great Bear at auction last fall.

And, after a little sprucing up (a lot actually, about $2.2-million dollars worth), Great Bear opened up again in April.

"Our goal is to raise the standard of golf in the area," Kirkwood said. "There are several good courses in the area that have gone under, but I think we’ve come up with a solution. We now have two excellent golf courses to offer to golfers and we’re very excited about it."

A lot of the credit has to go to long-time superintendent Keith Snyder, who has been at the course almost since the start. He and his skeleton staff did their best to keep Great Bear looking as good as possible while it bounced between owners.

"From where we were a year ago to where we are today is remarkable," Snyder said. "The course keeps getting better and better and I’m the luckiest guy in the world to be here. They could have had this taken away from us, but Mr. Kirkwood stepped in and got us really going."

There are no parallel holes on Great Bear, which has five sets of tees, and golfers are able to get the feeling they always want, that they are alone of the course. You don’t hear yells of "fore" and you rarely even see another group. That’s a wonderful thing.

At Great Bear, the golfer can’t wait to get to the next tee to see what Nicklaus did. There are no bad holes and singling out just one or two isn’t fair to the rest of them because they’re all good.

You finish up on a sweeping dogleg left par five (575 yards from the back tees) that’s just a monster. Think you’re a big hitter off the tee? Try reaching this brute in two. Heck, getting on the green in three is an accomplishment.

"Once people play Great Bear they can’t wait to do it again," club manager Dave Korba said. "It’s a Nicklaus course that is just fantastic. Word is starting to get out about it opening back up and there is a lot of excitement around here."

And, yes, if you were wondering, there is a bear (a black one) that does roam the property and is periodically seen on the golf course.

But it’s not just bears that roam Great Bear. Deer, the big and the cutest of the small, hawks, foxes and turtles, among other creatures, call the course home.

Only one golf course designer could do justice to the natural beauty at Great Bear Golf Club—the one know worldwide as the Golden Bear, Jack Nicklaus. His 18-hole championship design… 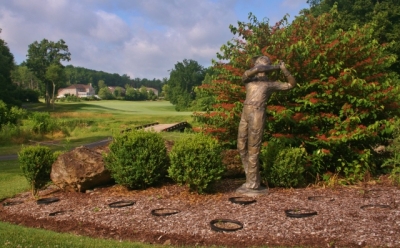