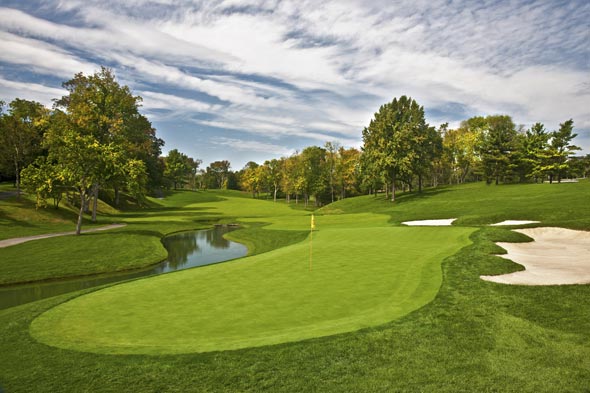 Prestigious Muirfield Village Golf Club, which is seizing the global golf stage this year as host of the Memorial Tournament and The Presidents Cup, climbed five spots to No. 14 in Golf Digest’s biennial list of America’s 100 Greatest Golf Courses. Muirfield Village, the Central Ohio layout considered by many raters as the jewel in Jack Nicklaus’ sparkling design résumé, led a Top-100 roll call of eight golf courses involving the design work of the Golden Bear.

Muirfield Village has not only been home to one of the most popular PGA Tour stops since 1976, but in October, the venue will play host to The Presidents Cup, the biennial global team competition pitting the U.S. against an International team made up of players from around the world, excluding Europe. Muirfield Village will become the only course in the world to have hosted the Solheim Cup (1998), the Ryder Cup (1987), and The Presidents Cup.

Situated on 220 acres, the championship venue is considered among the first in the world that was designed with large galleries in mind. In his quest for perfection and to accommodate the needs of the members as well as the world’s best players, Jack has tweaked every hole of a layout he first collaborated on with Desmond Muirhead and opened in 1974. In the past three years, he’s remodeled both the 16th and 17th, making the closing stretch one of the most dramatic in golf. Muirfield Village has been consistently ranked in the Top 20 in the United States and Top 50 in the world since it opened.

In 1987, the Country Club at Castle Pines joined America’s 100 Greatest and has remained there ever since. This year, the Jack Nicklaus Signature Golf Course, which opened for play in 1981, came in at No. 33. The course is known for its 600 feet of elevation changes and its stunning panoramic mountain views. No two holes on the 7,696-yard layout run parallel to each other. For 20 years, the championship-caliber golf course hosted The International, once the only PGA Tour event played under a unique Stableford format.

Like Muirfield Village, Sebonack Golf Club will be showcased to the world of golf this year when it hosts the U.S. Women’s Open, and like Muirfield, it also moved up five spots from its 2011-12 ranking to come in at 39. The Jack Nicklaus-Tom Doak co-design features holes that offer panoramic views of Long Island’s Great Peconic Bay and Cold Spring Pond. The visual impact of the water vistas competes for the golfer’s eye with the rolling fairways, expansive bunkers and waste dunes, and undulating greens that present challenging swales and burrows. The exclusive club was Golf Digest’s Best New Private Course of 2006.

Shoal Creek, No. 71 on Golf Digest’s list of America’s 100 Greatest, opened to much acclaim in 1976 and has had a strong major championship tradition ever since. The Jack Nicklaus design previously hosted the 1984 and 1990 PGA Championship, the 1986 U.S. Amateur Championship, and the 2008 U.S. Junior Amateur Championship. The 7,197-yard, par-72 layout will again provide a stern test to the world’s best in June with the Champions Tour’s Regions Tradition, played at Shoal Creek since 2011. The design is lauded for challenging yet fair play.

Whispering Pines Golf Club in Trinity, TX, a Nicklaus Design course featuring lead designer Chet Williams, is ranked 75th in Golf Digest’s prestigious list. The course, which is set along the shores of Lake Livingston, rests on 450 acres of beautiful pine and hardwood forest. Steered by a philanthropic vision, all membership and tournament activities at Whispering Pines are managed the nonprofit World Health and Golf Association, a charity program that supports health related causes and the promotion of amateur golf. Since it opened for play in 2000, the private Whispering Pines Golf Club has been a mainstay on various ranking lists.

Jack Nicklaus-designed Mayacama Golf Club made its Top-100 debut shortly after opening in 2001 and is now ranked 86th by Golf Digest. Nicklaus took full advantage of the natural terrain set in the rolling foothills of wine country to shape the course. Generous fairways appear as verdant fingers set in the valleys between oak-studded hills. Tees or greens, and sometimes both, are elevated. Greens are accepting, but also firm, fast, tiered and contoured. The Golden Bear designed Mayacama with the average golfer in mind. Thus Mayacama is less than 6,800 yards and is routed to be a very comfortable walk, essential since the club has no golf carts.

Soon after the famed Harbour Town Golf Links opened for play in late November 1969 (with a victory by Arnold Palmer in the Heritage Classic), the Jack Nicklaus and Pete Dye co-design debuted on America’s 100 Greatest as one of the Top 10. This year, the first course to ever be designed by Nicklaus ranked 96th in the list, up four spots from 2011-12. The RBC Heritage will be played at Harbour Town in April, marking the 45th consecutive year the course has served as host to one of the longest-running events on TOUR.

Coming in at 99, Valhalla Golf Club in Louisville, Ky. closes out the Jack Nicklaus-designed courses to appear on Golf Digest’s biennial list of America’s 100 Greatest. Valhalla is a unique design with an alternate fairway par 5, a par 4 with an island green, and an 18th green shaped like a horseshoe. The course opened for play in 1986, has hosted both the PGA and Senior PGA Championship, and was recently renovated by Nicklaus in anticipation of the PGA Championship in August 2014.