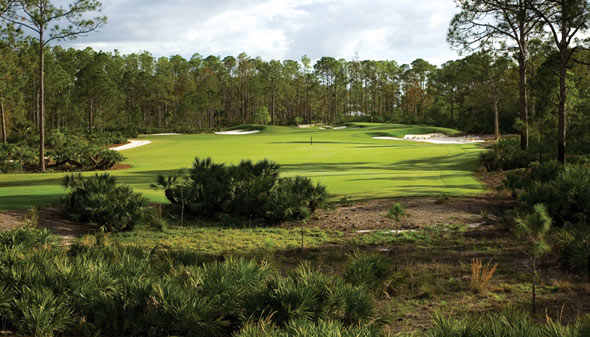 The Jack Nicklaus-designed course, set on 275 scenic acres, opened in 2007. With no development attached to the property, golfers can count on total tranquility — and they’ll need it, because Old Corkscrew has teeth.

Playing 7,393 yards from the championship tees, Old Corkscrew has a peak slope/rating of 77.6/153, making it one of Florida’s toughest courses for low handicaps. There are five tee sets here, so choose accordingly.

While playing corridors and fairways are mostly quite generous, the green complexes make up much of the challenge at Old Corkscrew. For example, while the blue tees are a 146 slope, the white tees — despite playing more than 300 yards less — are still a 144. The greens are contoured and often surrounded with trouble in the form of deep bunkers or water hazards.

Nicklaus also has a habit of creating risk-reward par-5 green complexes that jut out into water (employed on three of the four par 5s). Those aren’t the only risk-reward opportunities at Old Corkscrew, however.

Perhaps the most fun hole on the course is the short par-4 fourth, which has a fairway littered with bunkers. Those who play straight toward the green will have to carry traps and avoid water to the left, but a well-played shot has its rewards with a much easier chip onto the green than those who bail out to the right.

Old Corkscrew has a small clubhouse with a pro shop and grill that has a good lunch menu. The practice facility is a good one, with multiple greens and a large driving range.

The Jack Nicklaus-designed par-72 championship layout meets the highest design criteria. Since OCGC is not part of a real estate development, this course is a “core” or “stand-alone” extraordinary golf…