GOODYEAR, Ariz. — Some folks are frightened by 5-foot putts.

Others are intimidated by forced carries.

At the Golf Club of Estrella, the most nerve-wracking sight might be the signs at the edge of several fairways that warn: "Danger — Rattlesnake Habitat."

"The signs have been here as long as I have. Why they selected those areas, I don’t know," chuckled Trevor Finton, the head professional at the Golf Club of Estrella. "I mean, the rattlesnakes are pretty much all over, so you could have [the signs] on every single hole. They can come out anywhere."

A few decades ago, rattlesnakes and roadrunners were about all that roamed this cacti-covered landscape at the foot of the Sierra Estrella Mountains.

Even today, the Golf Club of Estrella — formerly known as Estrella Mountain Ranch — is about as close to the middle of nowhere as you can find in the Valley of the Sun, although the surrounding residential community is now the largest in Goodyear. The 7,139-yard course is about a 45-minute drive southwest of Phoenix Sky Harbor International Airport, where every second arriving passenger seems to be wheeling a golf travel case.

If you care about course design, you probably think you know Jack.

The Golden Bear has his paw prints all over Arizona’s golf scene — albeit, mostly at private facilities — but the Golf Club of Estrella was actually mapped out by Jack Nicklaus II, a former caddie for his famous father and now president of the family design firm.

Opened in 1999, the Golf Club of Estrella is Jack II’s only solo effort in the state. The greens don’t have the wild undulations that have become synonymous with the Nicklaus name, but there’s no doubt the eldest son of the 18-time major champion likes to serves up a hearty portion of intimidation from the tee, just like his old man.

Jack II also saves the best for last, creating a fine line between finishing with back-to-back birdies or putting up a big number before heading back to the clubhouse.

The 194-yard 17th is a slam-dunk selection as the signature hole thanks to its setting amid an army of tall cacti, but any attempt that doesn’t find the putting surface could be problematic. On the 437-yard finale, four bunkers split the upper and lower shelf of the fairway in the landing zone and separate the pin-seekers from the safety-first crowd.

"It’s definitely from that same design family — it’s got a lot of the similarities to a Jack Nicklaus course," Finton said. "There’s a lot of deep-faced bunkers that are well-placed in the driving areas. There’s a lot of grass out there, a lot of landing area, but the way the bunkers are placed narrows it down a bit. Visually, off the tee, it looks a little more demanding than what it really is. You have to play it a few times to see that there is more turf than it might look like."

The Golf Club of Estrella also houses a spacious natural-grass driving range and practice area, giving you lots to aim for before you arrive at the opening tee. Instruction is available.

Golf Club of Estrella: The verdict

In this golf-crazed valley, word-of-mouth typically travels further than some golfers are willing to. I mentioned the Golf Club of Estrella to an employee at Scottsdale’s PGA Tour Superstore location, and he made it sound like it was on another planet.

In typical traffic, it’s almost an hour drive from Scottsdale’s main drag. Thing is, the staff at the Golf Club at Estrella doesn’t want this place to feel like it’s anywhere near the hustle and bustle.

It’s less expensive than most championship-level courses in the valley, with unlimited golf, lunch and a dozen golf balls going for far less than just a tee time at other tracks. It’s a little more laid-back. And, as Finton has heard time and time again, "a lot of people say it’s worth the drive."

Golf Club of Estrella offers a classic golf experience unlike any in the area. Following in his father’s legendary footsteps, Jack II’s daily-fee championship course is golf in the traditional… 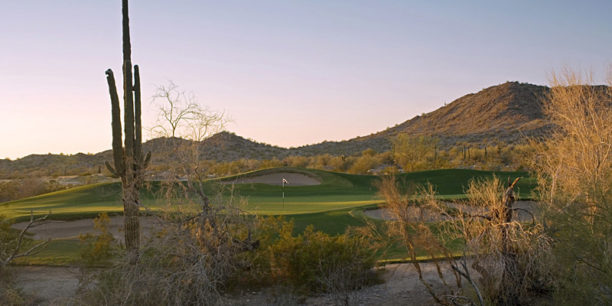 GolfArizona.com showcasing The Golf Club of Estrella in Goodyear