New for 10th staging of the event, each captain can select three assistants 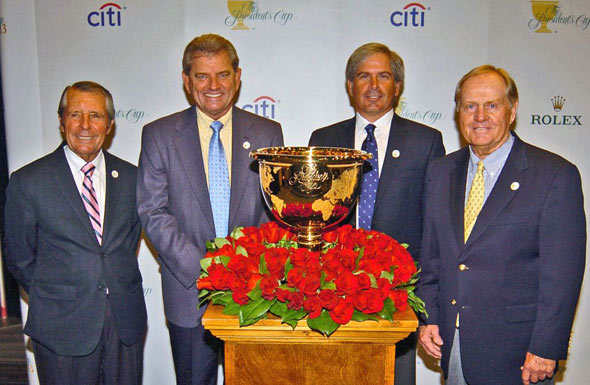 DUBLIN, Ohio – Today at Captains’ Media Day at Muirfield Village Golf Club in Dublin, Ohio, which marks the official one-year countdown to The Presidents Cup 2013, International Team Captain Nick Price named Shigeki Maruyama, Mark McNulty and Tony Johnstone as his captain’s assistants for next year’s event, while U.S. Team Captain Fred Couples named Jay Haas as one of his captain’s assistants and will make an additional announcement in the coming months. This marks the first time that each captain has the option of naming three official assistants, a change that was announced today by PGA TOUR Commissioner Tim Finchem.

The highly anticipated Presidents Cup is set to return to the United States next year at Muirfield Village Golf Club, October 1-6, 2013.

“Choosing my three captain’s assistants was really very easy for me,” said Price, who has the distinction of being the captain with the most Presidents Cup experience as a player. He competed for the International Team a total of five times. “I grew up playing golf back home with Tony Johnstone and Mark McNulty. The three of us have enjoyed a friendship and rivalry that has lasted more than 40 years, and having played on many teams together during that time, they were an obvious choice for me. They bring an incredible amount of match-play experience and knowledge to this team, and I know they are as excited as I am to be a part of The Presidents Cup again. Maruyama-san was an inspiration to all of us in every Presidents Cup team he played on. His enthusiasm, dogged competiveness and incredible team spirit are things I will never forget. He has a wonderful sense of humor, is always quick to smile and I am so looking forward to having him as a captain’s assistant. His presence and confidence are going to be a huge asset for our team.”

Maruyama was a member of the International Presidents Cup Team in 1998 and 2000. He posted a 5-0-0 record in the 1998 matches, helping lead the International Team to its lone outright victory in The Presidents Cup. Maruyama is one of four players in event history to go 5-0 (Mark O’Meara, 1996; Tiger Woods, 2009; Jim Furyk, 2011). His overall record in two appearances is 6-2-0. Maruyama has won three events on the PGA TOUR and 10 on the Japan Golf Tour, most recently the 2009 Golf Nippon Series JT Cup.

“I’m thrilled and very honored to be asked by Nick to serve as one of his assistants,” said Maruyama. “The Presidents Cup holds a special place in my heart, especially the 1998 event. I am already looking forward to the matches at Muirfield Village Golf Club and helping Nick and the International Team bring home The Presidents Cup for a second time.”

McNulty, who hails from Zimbabwe, was a Presidents Cup teammate of Price in 1994 and 1996. He compiled a 3-4-2 record, earning a half-point with Price in 1994 in the Day One Foursomes competition and a full point with Price in 1996 in the Day Two Four-Ball competition. McNulty was one of the leading players on the European Tour from the mid-1980s to the mid-1990s, winning 16 events, and he won 33 times on the Sunshine Tour, topping the Order of Merit nine times. He currently competes on the Champions Tour, where he has won eight tournaments, including the 2007 JELD-WEN Tradition, a major championship, and most recently the 2011 Liberty Mutual Legends of Golf, a team event, with David Eger.

“When Nick called me to ask if I would be one of his assistants for The Presidents Cup, it did not take me but a second to accept,” said McNulty. “Having played The Presidents Cup twice, I am very excited and will look forward to experiencing those wonderful emotions that come with this great competition. I shall do my best to help Nick and the International Team get their hands back on the Cup again.”

Johnstone, like Price and McNulty, is from Zimbabwe and spent his competitive career mainly on the South African Sunshine Tour, where he won 17 times, and the European Tour, where he won six times, including the 1992 British PGA Championship. He has represented Zimbabwe in international competition several times, including the Alfred Dunhill Cup (1993-98, 2000) and the World Cup (1994-98, 2000-01).

“I am absolutely delighted that Nick has accorded me the honor of being one of his captain’s assistants,” said Johnstone. “He, Mark and I have been close friends since childhood, and with Shigeki’s wisdom, we will do all we can to make next year’s Presidents Cup a memorable occasion for all. I can’t think of a better man than Nick to lead the International Team.”

Haas is a nine-time winner on the PGA TOUR and a 16-time winner on the Champions Tour, including two major championships and the 2012 Principal Charity Classic in June. He represented the United States in The Presidents Cup in 1994 and 2003, where he was a captain’s pick both times and compiled a 5-3-1 record. He served as Couples’ captain’s assistant both in 2009 and 2011. In 2011, Haas’ son Bill competed on the U.S. Team.

“Jay has really been my right-hand man these past two Presidents Cups, and I know I couldn’t do my job as captain without him,” said Couples, who will attempt to better Jack Nicklaus’ 2-1-1 record as captain and earn an unprecedented third-straight victory with the U.S. Team. “Jay has been one of my closest friends for many years. I rely on his leadership qualities, organizational skills and ability to help bring the team together to play their best, but also have a great time in the process. I’m really looking forward to next year’s event, and I know Jay feels the same way, as we look to make it 3-0 for the U.S. Team.”

“Being a part of the 2009 and 2011 Presidents Cup has been a real highlight of my career, especially experiencing last year’s event with Bill, and I’m thrilled that Fred asked me back as a captain’s assistant for 2013,” said Haas. “Muirfield Village Golf Club is an amazing venue.”

Muirfield Village Golf Club becomes the third U.S. golf course to host The Presidents Cup, joining Robert Trent Jones Golf Club in Prince William County, Va., (1994, 1996, 2000) and Harding Park Golf Course in San Francisco, Calif., (2009). Muirfield Village is the first club in the world to host three of golf’s most prestigious international team competitions—The Presidents Cup, The Ryder Cup and The Solheim Cup. The Americans currently hold a 7-1-1 record in the competition, with Fred Couples leading the U.S. Team to victory in 2009 and 2011. Couples will return as U.S. Team captain in 2013, and World Golf Hall of Fame member Nick Price will lead the International Team.