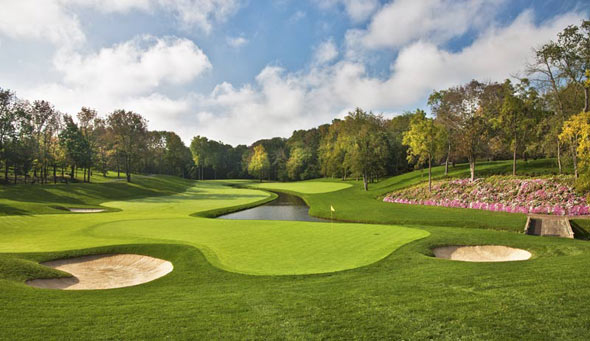 "I’d like to congratulate and thank Jack Nicklaus for his partnership in bringing The Presidents Cup to Muirfield Village Golf Club in 2013," said PGA TOUR Commissioner Tim Finchem. "The history of this golf course is well documented, as is Jack’s commitment to The Presidents Cup, which he served as U.S. Team Captain in 1998, 2003, 2005 and 2007. Jack created Muirfield Village to illustrate his passion for tournament golf and challenge the world’s best players. The selection of Muirfield Village as the site of the next Presidents Cup in the United States is confirmation of what the golf club and Jack Nicklaus has meant to the history of our sport."

"I have always considered Muirfield Village Golf Club a showcase for my love and respect for the game of golf, as well as a representation of my passion for competition and tournament golf," Nicklaus said. "In turn, I view The Presidents Cup as a wonderful showcase for the global game of golf and a platform to promote the good will and sportsmanship inherent to the sport. I have been extremely proud of my association over the years with The Presidents Cup and have been amazed and impressed with its growth as one of the game’s premier team competitions. I think this is an ideal marriage, and I am pleased and proud that Muirfield Village will have the opportunity to host this great event."

Muirfield Village Golf Club was the dream and work of Nicklaus. The land was acquired in 1966, and construction began July 28, 1972. The golf course is situated on 220 acres, which includes an 11-acre driving range renovated and expanded earlier this year. Designed by Nicklaus with early collaboration from Desmond Muirhead, the course was officially dedicated on Memorial Day, May 27, 1974, with an exhibition match between Nicklaus and Tom Weiskopf. Nicklaus carded a six-under-par 66, which stood as the course record until 1979. John Huston’s 11-under 61 during round two of the 1996 Memorial Tournament is the current course record. The 18-hole layout played at 6,978 yards in its original form, but is now 7,366.

Nicklaus’ revolutionary design of Muirfield Village Golf Club was the first course in the world, from its inception, that was created with the spectator in mind. His creative use of "mounds" and "amphitheaters" became a model for tournament courses around the globe.

When it came to naming his masterpiece, Nicklaus looked to the origins of golf and the home of the Honourable Company of Edinburgh Golfers, Muirfield, whose records date back to 1744 when the Club wrote the original 13 rules of golf for the first competition played for the Silver Club. Muirfield in Scotland is where Nicklaus represented his country for the first time in the 1959 Walker Cup and where he won his first Open Championship in 1966 to complete the first Grand Slam for the first time. It was a perfect fit for the name of his new world-class golf course and club.

At the most recent Presidents Cup, the U.S. Team captured The Presidents Cup for the seventh time, led by Captain Fred Couples and a 5-0-0 performance by veteran Jim Furyk. Tiger Woods, one of Couples’ two captain’s picks, clinched the Cup for the United States with a 4-and-3 win over Australia’s Aaron Baddeley in Sunday Singles. For Woods, it was the second consecutive time he had scored the winning point at The Presidents Cup, becoming only the second player to accomplish that feat (Couples, 1994, 1996) and the first captain’s pick to do so. Greg Norman’s International Team played well, but was undone by the Foursomes competition. The Internationals were outscored 8-3 in foursomes and eventually lost the Cup by four points (19-15).

The Presidents Cup was developed to give the world’s best non-European players an opportunity to compete in international team match-play competition. The U.S. Team has won seven of the nine previous Presidents Cups, and the only outright win by the International Team came at the 1998 event in Melbourne. The 2003 Presidents Cup in South Africa—the second of four captained by Nicklaus—ended in an historic tie, when, after three halved sudden-death playoff holes and in darkness, Captains Nicklaus and Gary Player declared the matches a draw.

The Presidents Cup is a unique golf event in that there is no purse or prize money. Players are not personally paid for their participation, but each competitor allocates an equal portion of the funds generated to charities of his choice. In total, more than $27 million has been distributed to approximately 425 charities charities in 15 countries since the inception of The Presidents Cup in 1994, including a record $4.5 million from The Presidents Cup 2011.