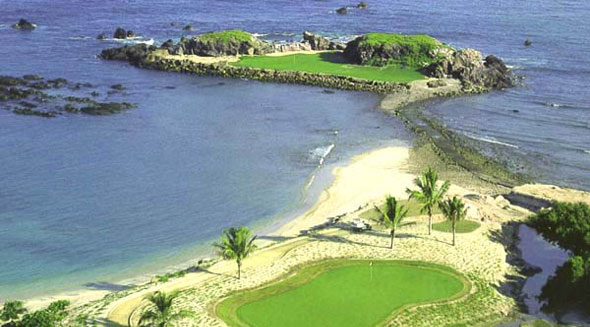 Friday’s game will be played in a team scramble format on Pacifico, and Saturday’s in a two ball, best-ball format on Bahia with prizes for the winning team, hole in one, closest to the pin and longest drive. The renowned Pacifico course, with eight holes directly facing or playing alongside the Pacific Ocean, features the “Tail of the Whale,” an optional par-three hole and the world’s only natural island green. The Bahia course, Nicklaus’ second championship course in Punta Mita, has six ocean holes and opened in late 2008.

The package includes three nights’ accommodations, daily breakfast, roundtrip airport transfers, opening cocktail, guest chef lunches and dinners, wine and tequila tastings, cooking classes, participation in the Punta Mita Cup and a custom fit TaylorMade putter to take home. Rates begin at $1,390 per person for a three-night stay based on double occupancy. Punta Mita, one of Mexico’s most luxurious resort communities, had a record 2011 season with occupancy levels at historic highs as luxury travelers rediscovered this preferred destination. Reservations can be made by calling 877.250.8871 or emailing .