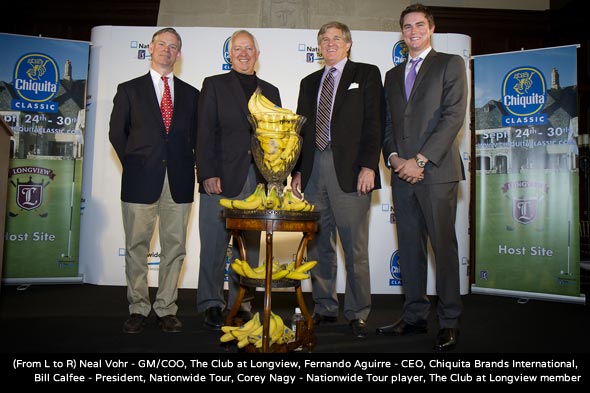 CHARLOTTE, N.C. – The PGA TOUR’s Nationwide Tour will partner with Chiquita Brands (NYSE: CQB) to bring the Nationwide Tour to Charlotte, N.C. for the first time in 2012 when the Chiquita Classic is played Sept. 24-30 at The Club at Longview, it was announced today. The announcement comes six weeks after Chiquita unveiled plans to relocate its global headquarters to Charlotte. A three-year agreement is in place.

“We are pleased to bring the Chiquita Classic to the greater Charlotte area,” said Fernando Aguirre, Chiquita chairman and chief executive officer. “We promised to help make a positive impact in the Charlotte area, and bringing this fantastic golf tournament here will do just that. The Chiquita Classic provides us a great opportunity to feature our nutritious products, highlight our commitment to health and wellness, and to assist Greater Charlotte charities.”

The Chiquita Classic will feature a field of 156 players competing over 72 holes of stroke play for a purse of $550,000. The Club at Longview is a 7,065-yard layout designed by legend Jack Nicklaus which opened for play in 2003 with a guided tour of the golf course by the architect himself. It is located in the Charlotte suburb of Weddington, about 15 miles from downtown. A pro-am will be played on Wednesday, Sept. 26th.

All four rounds of the Chiquita Classic will air on Golf Channel in the U.S., with the tournament made available in 176 countries and territories around the world. The Chiquita Classic joins the PGA TOUR’s Wells Fargo Championship, played at Quail Hollow Club in May, as Charlotte’s fall option to watch and support a PGA TOUR-sanctioned event.

“The Nationwide Tour is thrilled to partner with Chiquita in Charlotte,” said Nationwide Tour president Bill Calfee. “We have had a very solid relationship with them since they joined our family of sponsors two years ago. Chiquita has made a strong commitment to the Nationwide Tour and to Greater Charlotte, and we look forward to building a first-class event together.”

“The Chiquita Classic will provide significant national and international exposure for not only the Chiquita brand, but the Charlotte community as well,” Calfee added. “The Classic will have a measurable impact on local charities given Chiquita’s corporate focus on giving back and building on the PGA TOUR’s already strong presence in Charlotte that the Wells Fargo Championship has established.”

“It is always an honor when one of our golf courses is selected to host a PGA TOUR-sanctioned event,” said Jack Nicklaus, whose Nicklaus Design firm has created as many as 95 courses which have hosted a professional tournament worldwide or a significant US national amateur championship. “The Club at Longview was our first design work in the Charlotte area and it turned out to be a beautiful setting for golf. The property was naturally rolling, with nice changes in elevation. There was a mix of existing open fields, accented by wooded draws or valleys that contained wetlands, streams and lakes. This all combined to add to the variety of the golf experience. Outside of the aesthetics, the golf course at Longview should be a good test of golf for these up-and-coming touring professionals. The golf fans in the Charlotte area should enjoy the level of competition when the Chiquita Classic comes to town in September.”

The Chiquita Classic will name a benefiting charity or charities in the near future. In addition, the tournament will implement the “Charity Ticket Program”, which will enable Charlotte-area charities to sell Chiquita Classic tickets and retain 100 percent of the sales for the benefit of their respective organizations. The 2010 and 2011 Chiquita Classics raised more than $400,000 for charitable organizations. Details will be announced at a later date on how greater Charlotte-area charities can participate in the Charity Ticket Program.

Tournament management for the Chiquita Classic will be provided by HNS Sports Group, a full-service event management company headquartered in the Columbus, Ohio suburb of Dublin. HNS runs the PGA TOUR’s Memorial Tournament, the Nationwide Tour’s Nationwide Children’s Hospital Invitational and the Wendy’s 3-Tour Challenge, among other charity and professional tournaments.

The Chiquita Classic will be one of 27 Nationwide Tour events played in 17 states in the U.S., plus Chile, Colombia, Mexico and Panama in 2012.

For more information about the Chiquita Classic, call 877-597-8855, email or visit http://www.chiquitaclassic.com/.

ABOUT CHIQUITA BRANDS INTERNATIONAL, INC.
Chiquita Brands International, Inc. (NYSE: CQB) is committed to Improving World Nutrition, as a leading international marketer and distributor of nutritious, high-quality fresh and value-added food products – from energy-rich bananas, blends of convenient green salads, other fruits to healthy snacking products. The company markets its healthy, fresh products under the Chiquita® and Fresh Express® premium brands and other related trademarks. With annual revenues of more than $3 billion, Chiquita employs more than 21,000 people and has operations in nearly 70 countries worldwide. For more information, please visit our corporate web site at www.chiquita.com.

ABOUT THE CLUB AT LONGVIEW
The history of Longview dates back to the 1800’s when it was first known as The Longview Black Jack Farm. In 1953 Mel Graham’s father purchased the property in order to relocate the family dairy farm. In 2001, the dream of The Club at Longview was put into action. As Jack Nicklaus stood on this property, and looked at the gentle rolling hills with its pines and hardwoods, its creeks, ponds and nature preserves, he said, “It’s as if it was always meant to be the home of a great golf course.” Two years later, on October 20, 2003, The Club at Longview officially opened! The Club at Longview features the only gated residential golf course in the Charlotte region to earn a place in Golf Digest’s prestigious ‘Best in State’ rankings, where it has been a fixture among North Carolina’s top 20 ever since its 2003 opening. The Club at Longview offers manor-style luxury estates in the Charlotte-area’s only gated residential community with a Jack Nicklaus Signature Golf Course. Located in south Charlotte, North Carolina, minutes from I-485 and just across the Union County line, this private, gated enclave is convenient to all that Charlotte has to offer, yet provides the perfect retreat in which to escape the ordinary.

ABOUT NATIONWIDE
Nationwide, based in Columbus, Ohio, is one of the largest and strongest diversified insurance and financial services organizations in the U.S. and is rated A+ by A.M. Best. The company provides a full range of personalized insurance and financial services, including auto, motorcycle, boat, homeowners, life, farm, commercial insurance, administrative services, annuities, mortgages, mutual funds, pensions and long-term savings plans. For more information, visit www.nationwide.com.

The Club at Longview

Longview and it’s surrounding environment will create a natural backdrop for the first Jack Nicklaus Signature Course in the Charlotte region, with a wooded, gently rolling landscape and wonderful features,…

More News from The Club at Longview 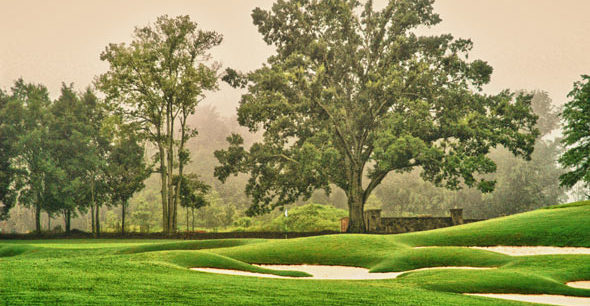