LOS CABOS, Mexico – Bigger is not always better. Especially when location, namely a pair of superlative settings on the Sea of Cortes, trumps size.

With seven holes fronting the turquoise-blue sea, the Ocean Course at Cabo del Sol is the course that placed Los Cabos, the 20-mile corridor at the tip of Mexico’s Baja California Sur, squarely on the global golf map when it debuted in 1994.

The top-ranked international venue on designer Jack Nicklaus’ resume, the Ocean Course at Cabo del Sol is revered as the finest course in Latin America. Like other layouts built in the 1990s and earlier, the club has responded to equipment advances by subtly altering the strategy on a number of holes.

While greens have been reshaped and bunkers repositioned by Nicklaus over the years, his revision of the layout’s back-to-back par threes at holes 6 and 7 and overhaul of the par-four fifth hole represent a complete departure from previous modifications. Not since Pebble Beach acquired a parcel of coastal real estate over 10 years ago and brought in Nicklaus to build a new par-three fifth hole prior to the 2000 U.S. Open has a world-class course made a bigger change to better itself.

The alterations to the Ocean Course fly in the face of conventional thinking. Given the value of prime oceanfront real estate in Los Cabos, most developers have relocated golf away from the ocean. Also, courses seeking to defend par against high-tech equipment tend to lengthen holes, not shorten them.

The new back-to-back par threes at Cabo del Sol go against the grain on both counts. Each newly configured hole is shorter than the original. In addition, each has been edged closer to the sea, heightening the drama, challenge and sensory experience for players. Similarly, at No. 5, Nicklaus and his design team plan to shift the tees and relocate the green complex to the brink of the crashing surf. When completed in mid-2011, the new fifth hole will enhance the already spectacular ocean experience at the recast sixth and seventh holes, both of which skirt the wave-tossed shoreline.

At the new sixth hole, tee boxes have been shifted onto pinnacle-like granite outcrops that rise from the surging sea. The green complex and surrounds of the original hole have been converted into an abbreviated fairway to accommodate shots that come up short.

As before, the hole is aimed directly at the Sea of Cortes, but at a different angle. The new green has been pushed farther out onto a rock shelf perched above the ocean. Golfers won’t play around the sea, as before. They’ll play into the sea. An ocean inlet runs nearly the entire length of the hole on the left, the waves churning into a narrow tidal pool just below the putting surface. The tidal pool, which ebbs and flows with each wave, wraps behind the green like a horseshoe. From the tee, the putting surface appears to float, mirage-like, on a fissured granite promontory lashed by the sea.

With the prevailing wind across or directly in a player’s face, the new sixth presents a firm test to better players from the tips at 184 yards. The challenge is graduated for average golfers from forward tees that play as short as 125 yards. Two deep bunkers at the front left of the kidney-shaped green are designed to prevent hooked tee shots from tumbling down a steep cliff into the sea. A pair of bunkers encased in rock behind the green are also intended to save players from a fate worse than sand.

The new sixth hole, opened in mid-December, 2010, is six yards shorter than the original but at least twice as compelling. “I thought No. 6 was spectacular before, but it’s even more spectacular now,” Nicklaus said shortly after work was completed.

The new seventh hole on the Ocean, equally transformative, is an all-or-nothing short par three that could rival the layout’s stellar 17th hole for beauty and prestige.

Previously a 207-yard par three situated well above the beach, the new seventh, opened in November, has an entirely different orientation. Players now depart the sixth hole and step directly onto a tee complex set on a granite outcrop a few meters above the same tidal inlet that nearly encircles the sixth green.

With five sets of tees ranging from 139 to 99 yards, the tee shot, calling for no more than an 8- or 9-iron into a quartering breeze, must carry a sandy stretch of beach and find a partially obscured green carved into a broad dune 20 feet above sea level. The small, well-contoured putting surface has been sculpted into a headlands-like rock formation flanked by bunkers, beach grass and boulders. Tawny granite outcrops frame the green to the right. A prominent sandy mound serves as a backdrop for this jewel box-like setting. While the hole is short, the new seventh is penal to offline shots.

Played back-to-back, the strategic and aesthetic thrill provided by the two new holes is memorable. As the wind changes in velocity and direction from morning to afternoon, this scintillating pair of par threes will play differently throughout the day.

According to Jim Lipe, a design consultant with Nicklaus Design who worked with Nicklaus to create the new fifth hole at Pebble Beach, “With water crashing all around you on the sixth green and seventh tee, the connection to the ocean is greatly enhanced at both holes.” Lipe added that given the stringent environmental regulations in place today throughout the world, the ability to build holes close to the sea won’t happen many more times.

As pundits have noted, the one factor in golf the higher handicapper cannot overcome is length. With a short iron in his hands from the forward tees, the average player is not disadvantaged by the new seventh hole, which is 68 yards shorter stem to stern than the original. It can be conquered with one decent swing. Better players will need to hit an accurate tee shot to have a chance at birdie, especially when the pin is tucked to the right and semi-obscured by the rock formation.

Like the 12th at Augusta National and the seventh at Pebble Beach, the new No. 7 on the Ocean Course asks for finesse and accuracy, not brute strength. “We now have a genuine short par three that adds balance to the routing and provides a nice change of pace during the round,” said Greg Tallman, Cabo del Sol’s director of golf.

Taken together, the new holes on Cabo del Sol’s Ocean Course have the potential to rank among the finest back-to-back par threes in the sport, rivaling Cypress Point’s famed tandem at Nos. 15 and 16. Throw in the revamped fifth hole, and this trio will rival the closing stretch on the Ocean Course, which Nicklaus himself once described as “the three finest finishing holes in all of golf.”

Having applied the finishing touches to the front nine’s middle holes, Nicklaus recently said, “While holes 5, 6 and 7 are not the climax to the round, they’re just as spectacular as 16, 17 and 18. There’s no question that all three holes are better holes.”

A case can also be made that with the debut of the two new holes at 6 and 7, the collection of par threes on the Ocean Course ranks amongst the finest in the game.

The trans-arroyo, Redan-style 13th is a modern classic stretching to 213 yards, while the 17th, which plays from a seaside cliff over a wave-washed beach to a pulpit green set atop a granite shelf, is one of the most dazzling par threes in the world.

In sum, the layout’s “impregnable quadrilateral” of par threes will rivet every golfer’s attention as Cabo del Sol once again raises the bar for golf excellence in Latin America.

The Ocean Course is described by course designer Jack Nicklaus as “the best golf property I’ve ever seen.” This 18-hole, award-winning course is one of the few courses in the… 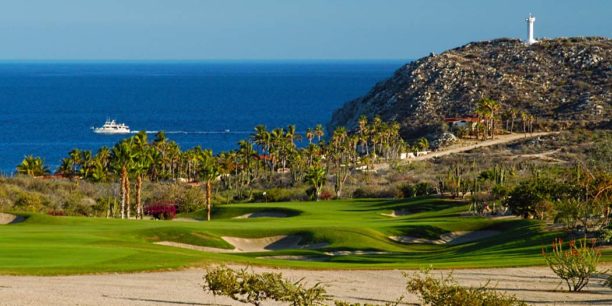 Cabo del Sol ranked No. 10 on LINKS Magazine Most Spectacular Courses in the World