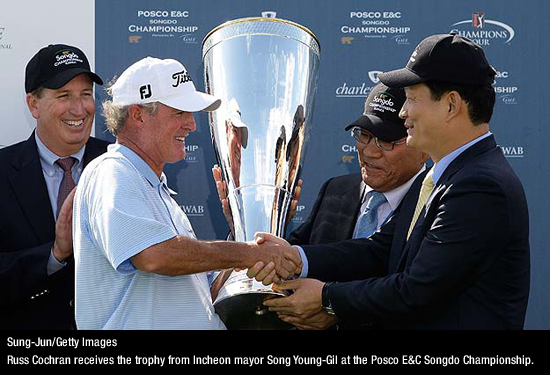 INCHEON, South Korea (AP) — Russ Cochran won the Songdo Championship on Sunday for his first Champions Tour victory after making a birdie on the opening hole of a playoff with Fred Funk in the 50-and-over circuit’s first event in Asia.

Cochran, who shot a final-round 66 to force the playoff, tapped in for the win after splashing a shot from the bunker to about a foot from the hole.

“I’ve been playing well over the last year, year and a half and I felt like a victory was in the near future,” said Cochran, who was out of golf for about six years with wrist and elbow problems that required surgery.

“I’m back playing and my game’s a little bit different, but it’s pretty solid,” he said. “I’m hoping I can take this and go (on) to more victories on the Champions Tour.”

Funk, who began the day with a two-stroke lead, shot a 68. He had a chance to win in regulation, but missed 3-foot birdie putt on the par-5 18th.

He landed his approach into a bunker on the playoff hole — a replay of the 18th — but failed to get up and down and extend the match.

Tom Pernice Jr., Cochran and John Cook were all tied for second entering the final round.

Pernice had a 67 to finish a stroke back at 11-under after missing a putt on the final hole that would have gotten him into the playoff.

Tom Watson, who at 59 lost in a playoff to Stewart Cink in last year’s British Open, shot a 70 to finish at 3-under. Bernhard Langer, a five time winner this year on the Tour, shot an 80 to finish at 6-over.

Funk, who won the JELD-WEN Tradition — a major title — three weeks ago, was clearly disappointed at the outcome.

“It was my tournament to win,” he said.

The 54-year-old Funk was co-leader with Michael Allen and Jay Don Blake after the first round and was sole leader going into the final round.

“I was very shocked when Fred missed,” said Cochran, adding he had given his ball to his caddie — who is also his son — and was in the process of handing over his glove when Funk’s short putt veered off to the left of the hole.

The event, played in the port city of Incheon west of Seoul, had a record Champions Tour purse of $3 million.

The tournament was plagued by heavy rains, which delayed the start of play Friday and Saturday. Conditions markedly improved Sunday with play ending under sunny skies.

Golf great Jack Nicklaus, who designed the course, said Wednesday that a performance of 4-under a day would probably be enough to win the tournament. He was nearly right.

Champions Tour President Mike Stevens declared the tournament a success, despite the challenges posed by the weather and the logistics of playing so far away in Asia.

“We’re embarking on an international strategy and growth for our tour,” he said Sunday.