The PGA Tour officially arrives in Asia on Friday when the Posco E&C Songdo Championship presented by Gale International tees off at the Jack Nicklaus Golf Club in the burgeoning South Korea city of Songdo. The inaugural Champions Tour event is the first full-field PGA Tour event to be played in Asia.

The Songdo International Business District, located 40 miles west of Seoul in the country’s largest current economic development project, is being developed by Gale International. The Jack Nicklaus Golf  Club Korea is the centerpiece and for this week, the home to some of golf’s most decorated and popular champions. The 60-man field includes such marquee names as Tom Watson, Mark Calcavecchia, Jay Haas, Mark O’Meara, Champions Tour money leader Bernhard Langer, and Jeff Sluman, the former PGA Championship winner and Jack’s assistant captain on the US Presidents Cup.

“This is a significant step for the Champions Tour to expand the reach of our brand globally with some of the most recognizable and accomplished players in the game,” said PGA Tour Commissioner Tim Finchem. “The Korean market is an important one to the PGA TOUR and we welcome this addition to the Champions Tour schedule and the opportunity to further elevate golf in South Korea with an event of this magnitude.”

“We have many players from this part of the world that are actually starting to play very, very well on the world circuit,” Nicklaus said. “Were going to see the growth of the game and I think the Olympics have a lot to do with that. We’ll have a tremendous growth of the game (throughout Asia).”

The 54-hole stroke-play tournament also includes the largest purse ever on the Champions Tour, with $450,000 of the $3 million purse going to the winner.

“I’m looking forward to it,” O’Meara said. “I’ve spent a lot of time in the Far East, in Japan, but never in Korea so it’s a new experience for me. I’ve heard some wonderful things about the course and about the resort. 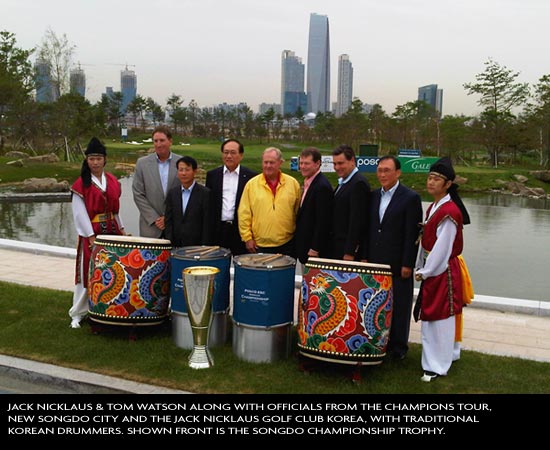 “I know that golf is growing in Korea by leaps and bounds. There are great Korean players and more are coming along. This is a win-win situation for the Champions Tour and also for Korean golf.”

Awaiting the players at the Jack Nicklaus Golf Club Korea is a par-72, 7,087-yard Nicklaus Signature Golf Course and a club that offers world-class amenities, including a 60,000-square-foot clubhouse and luxury living in its golf lifestyle community.

“The golf course is totally created, but one we believe is world class,” Jack Nicklaus said. “The project is right off Incheon Bay, so the golf course provides bay and harbor views. As you move across the golf course, the look and playing experience will change throughout. We offer a seaside links look coming off the water, transitioning into a combination of sand, rocks and trees, and finally a more treed, parkland feel. The idea is to give you a sense that you are moving inland.”

“I think the players will find the Jack Nicklaus Golf Club Korea to be an exceptional golf course and club,” Nicklaus continued, “and, with the addition of this event, can only add to the exciting things happening within the game of golf in South Korea and enhance its fast-growing reputation worldwide.”

“We have long recognized the strategic importance of a presence in Asia,” said Mike Stevens, President of the Champions Tour. “Our players are excited about this opportunity to showcase the Champions Tour in South Korea, especially at another prestigious Jack Nicklaus venue. We applaud Jack for his support of this tournament and for his initiative and vision in bringing this event to fruition.”

“It is significant that this premier PGA Tour golf tournament is being held in Songdo International City, Incheon,” said Incheon City Mayor Sang-soo Ahn. “I am confident that the Champions Tour will contribute greatly to raise global awareness of Songdo IBD and Incheon City.  An event of this stature further reinforces Songdo IBD’s position as a truly international city.”