Victoria, B.C. – Camilo Villegas and Fred Couples have both earned victories on their respective tours earlier this month, and this summer they will be hoping to add the title of TELUS World Skins Game champion to their list of accomplishments in 2010. The two golf superstars were added to the field for this year’s event today, joining Mike Weir, when it comes to Victoria, British Columbia for the first time in June. The final two players will be announced in the coming weeks.

With an incredibly strong start, Villegas has been one of the most talked about players on the PGA TOUR so far this season, and justified the accolades with an impressive five-stroke victory at The Honda Classic three weeks ago. The Colombian native won his TELUS World Skins Game debut in a playoff in 2008 but was unable to defend his championship last year due to a scheduling conflict.

“I really enjoyed my time playing in the TELUS World Skins Game in 2008, and was disappointed to not be able to defend my title last year, so I’m hoping to make up for it this summer,” said Villegas. “I really enjoyed the format, the strong field the event attracts, and playing in front of the Canadian fans, so I’m excited about being invited to return. The fact that the event also does a wonderful job raising money for a local charity means a lot to all of us.”

Couples, of course, is no stranger to the TELUS World Skins Game and to Canadian fans. He will be making a record tenth appearance in the event, having earned more than $1.2 Million in prize money during that time. Couples is enjoying an historic year on Tour, but this time as a rookie on the Champions Tour. In his first three starts on Tour, he has finished second followed by back to back victories, becoming only the sixth player in Champions Tour history to win two of his first three starts.

“With my early success on Tour, it’s obviously a lot of fun playing golf right now, and I look forward to that continuing this summer when I come to Canada to play in the TELUS World Skins Game,” said Couples. “It has been one of my favourite events to play each year, and the fact that it will be visiting Victoria for the first time will make for an exciting two days for both the players and the fans there.”

The two-day event will be held on June 21 and 22, 2010 and will feature five of the top names in international golf each representing a different country. The intimate, relaxed setting of the Skins Game format allows players to engage with the cameras and the crowds as they compete against each other for pride, prize money and the event’s designated charity, Janeece Place.

The TELUS World Skins Game is always a highlight of the Canadian summer sporting schedule for the country’s most passionate golf fans, as well as the community that hosts it. Fulfilling its promise to ‘give where we live’, TELUS partners with local charitable organizations to make a difference as the event travels from coast-to-coast. Funds are generated through the ‘Charity on the Course’ program which includes donations made for every birdie and eagle played by the professional golfers during the two days of competition, as well as an online charity auction through eBay.

This summer’s game will improve the quality of life for Vancouver Island’s sick kids and their families for years to come as the money raised during the event will benefit the Queen Alexandra Foundation for Children in support of Jeneece Place, a home-away-from-home to be located near the Victoria General Hospital.

“Jeneece Place is an important project that will make life easier for families during very challenging times in their lives. The TELUS team is thrilled we can help make Jeneece Edroff’s dream a reality,” said Darren Entwistle, TELUS president and CEO. “We’re also pleased we can bring the TELUS World Skins game to Victoria during economically challenging times, when the influx of golf tourists and TV cameras will give the local economy an important hand-up.”

Bear Mountain Resort’s Mountain Course was co-designed by Jack Nicklaus and his son Steve and opened in August 2003.  In June of 2009 the new Nicklaus Design Valley Course opened, giving Bear Mountain the distinction as the only resort in Canada with 36 holes of Nicklaus Design golf. The TELUS World Skins Game will take place on the Mountain Course – a masterpiece, offering challenging terrain and spectacular natural beauty. A par 72 playing at 7,212 yards, the course takes full advantage of its setting atop a 1,100-foot mountain, exhibiting dramatic elevation changes and awe-inspiring views.

The par 71, 6,807 yard Valley Course is more forgiving and plays at a lower elevation than the Mountain Course. It alternates between 300 and 400 feet above sea level with different vistas and scenery, but is equally spectacular. Bear Mountain also features a Westin Hotel, Spa, Athletic Club, a variety of restaurants and a Village to round out the complete resort experience.

Owned and operated by IMG in Canada for 18 years, the TELUS World Skins Game has included many of the biggest names in the game including Jack Nicklaus, Sergio Garcia, Phil Mickelson, Fred Couples and Greg Norman. Additional players for the 2009 tournament will be announced in the coming weeks and regular updates will be posted on www.telusskins.com. 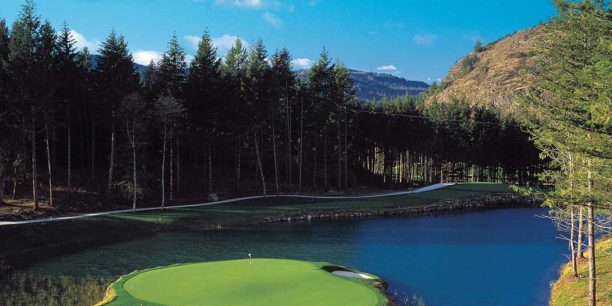