You’ve probably heard of Bay Creek Resort and Club. It’s the home of two of Virginia’s most highly ranked golf courses, one a Jack Nicklaus Signature and the other an Arnold Palmer. But even if you have seen the beautiful pictures of these two gems, you may not know where they are located, or the fascinating chronicle about how Bay Creek came to be. With its world-class golf and great variety of on-site accommodations, Bay Creek Resort and Club is one of our area’s most intriguing Stay and Play, golf travel options.

Though the ending won’t be written for some time. The early chapters already reveal the story of a dreamer, the history of a community and the full account of how two golfing legends, and rivals, were able to work together for the first time, to mold a charming piece of bay-front property into 36 of the most scenic and serene golf holes to be found anywhere.

Bay Creek is located on, what some would call, the road less traveled; the southern tip of the Delmarva Peninsula, in quaint Cape Charles. Surprisingly, many Virginians have never ventured to that area of the state, but those that have know, the Eastern Shore has a look and a feel all it’s own.

There are only two ways to get to Bay Creek Resort and Club. One, of course, is to cross the Bay Bridge in Maryland and drive south all the way down the Eastern Shore, a pleasant route indeed, but offering no competition to the southerly route down I-64 through Hampton Roads, Norfolk and eventually to Route 13, or more commonly known as the Chesapeake Bay Bridge Tunnel, the highlight of the drive.

When the 23-mile combination of bridge and underwater tunnel was completed in 1964, bisecting the mouth of the bay and the Atlantic Ocean, the structure was named as one of the Seven Engineering Wonders of the Modern World. Driving across the ocean on a two-lane highway is an incredible experience. While there is a fee involved in crossing the bay, it’s evident once you begin your drive across the bridge why Dickie Foster, the visionary behind Bay Creek, refers to the toll as a “serenity tax.”

In 1961, Foster, now a Virginia Beach based developer and entrepreneur, was on the construction team of the bay bridge tunnel. He was involved in creating a link to the land, where unbeknownst to him at the time, he would undertake his most daring venture, some 35 years later.

Dickie describes the experience of crossing the bridge, even today, as “going back in time 50 years.” That is an apt description, as things just seem to move a bit slower on the shore. Just a short distance after you hit dry land on Rt. 13, you will find historic Cape Charles, home to a once thriving harbor and plenty of great stories from the heyday of Chesapeake Bay.

Over a period of 100 years, Cape Charles had run the gamut. When Foster first purchased his land in 1996 he desribed, “the town was dead, but the spirit wasn’t.” A quaint downtown strip of specialty shops, galleries, restaurants and bars sits bay-front and is really a charming place to spend some time. Bay Creek Resort and Club became the heartbeat of the town.

Dickie Foster, owner of Baymark Construction, knew what he wanted to do with his new 1800-acre bay-front property. He envisioned Bay Creek, and according to Foster, he went “all in.” It was a risky business proposition for certain, but he had fallen in love with the land and had seen something special in his new purchase. Sometimes, all it takes is a feeling, or as Foster explained, “At some point, it’s not about money, it’s about what have you done?” This, however, was a gigantic undertaking.

Foster would oversee most of the property’s details; the residential aspects, the marina the restaurants and shops, heck, even the landscaping, which he keeps his ever watchful eye on still today. Though when it came to golf he admittedly knew very little and doesn’t play the game. “The sport bores me,” quips Foster. “I really only knew two golfers.”

One of those men was Arnold Palmer. Dickie had worked closely with Palmer in the past on a proposed golf course in Virginia Beach as well as more recently at the Signature at West Neck in Virginia Beach. The two instantly hit it off. So, of course, Arnie was the first name that popped into Foster’s head to design Bay Creek. But little did the King know, that his old friend had an even bolder plan.

e other golfer that Foster knew just happened to be Jack Nicklaus. What are the chances? Dickie asked Nicklaus to shape the remaining 18 holes, without the knowledge that Arnie and Jack, known as the greatest rivalry in competitive golf and the business of golf, at the time had yet to collaborate on a single property. Dickie only knew that he wanted the best and secretly proposed to Arnie and Jack the idea of working together at Bay Creek.

Industry executives and insiders said “You did what?” remarked Foster. But as Bay Creek General Manager Mark Wesolek explained, “He was just following his heart, ignoring and unaware of the industry notion that these two greats, with completely different personalities and design characteristics couldn’t and wouldn’t work together.”

Palmer and Nicklaus each mulled the idea with a bit of trepidation, but to everyone’s surprise soon jumped in full-bore on the project. Even though they both referred to the other as “the other guy,” according to Foster, neither could deny that the property where Bay Creek resided was one of the most beautiful locations that they could have hoped to get their hands on; a golf course architects dream.

Each designer was asked to submit an initial version of plans. Both Jack and Arnie took the liberty of designing the bulk of their particular course on the prime Chesapeake Bay front, though succumbed to a plan that Foster would hatch. Each designer would get nine holes on the bay side and nine holes on the Old Plantation Creek Side. The plan worked.

Dickie let his old friend Palmer have the first crack at the property and the Arnold Palmer Signature Course at Bay Creek opened in 2001. As Arnie, himself, put it, “There’s not a better place in the world to put a golf course and have it work as well as it has … Bay Creek is a fantastic layout, one you’d never get tired of playing — and that’s the true measure of a great golf course.”

Holes 2,3 and 4 of the Palmer Course hug the bay, as you pass by a full-scale replica of the Old Cape Charles Lighthouse. There was an abundance of attention paid to the scenery and sightlines on every hole. The course doesn’t lack challenge either.

The Palmer Course annually ranks as one of the best in the state and along with the Nicklaus Course is ranked as as one of the top environmentally friendly courses in America, according to a recent Zagat Survey, which is key to the delicate Chesapeake Bay ecosystem.

Once Palmer’s Signature18 was in place at Bay Creek, the Golden Bear got his golden chance to make a truly special golf course.

Nicklaus had an equally beautiful piece of land as Palmer, and he also had the benefit of hitting second. In my opinion and from most historical accounts, if Palmer sets the bar, Nicklaus wants to exceed it. That feverish competitive relationship resulted in a huge dividend for Foster and Bay Creek and eventually for the golfer. The two legends dueled it out once again and when Jack was finished the resort featured 36 of the most challenging and visually intensive holes in the Middle Atlantic.

Don’t let the serenity of the environment lull you to sleep. Nicklaus’ front nine is a Bear (pardon the pun). The stretch of holes from 4-6 is unmatched anywhere in my opinion. Dickie Foster played a big part in Jack’s design by changing the location of his planned dream, bay-front clubhouse, and envisioning what would become the par 3 4th , a wonderful par 3 with a water backdrop as far as the eye can see. Nicklaus agreed, it was just too perfect of a spot. Foster’s first foray into golf course design was a success.

Jack also acquiesced, though it was not as if he had a choice, when Dickie constructed one of the iconic images of the property. Jack originally laughed when Foster, the bridge builder, placed a half scale replica of the Cape Charles Lighthouse in the middle of a cart bridge on the daunting par 4 5th. He called it, “Dickie’s silly little lighthouse.” Foster knew that his “little lighthouse” would turn into a scene that postcards are made of.

After going “all in,” it seems Foster’s gut feeling that he had something very special, is on the verge of reality. The two championship golf courses are extraordinary, the marina, restaurants and shops are all first rate and the on-site housing options are both convenient and perfectly crafted for any style of getaway or get together. But as GM Wesolek admitted, “Bay Creek is only at about 20% of what it will eventually be.”

Dickie Foster still doesn’t golf, but rides the course everyday to inspect his baby, constantly manicuring ideas for visual upgrades, and, especially tending to his rose bushes. In a way you could call it Bay Creek Gardens, “and you can see it all for the simple price of a greens fee,” closed Foster. 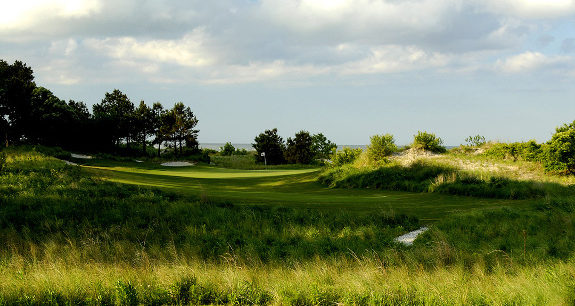