COZUMEL, MEXICO – “There isn’t much history to this particular piece of property, but the island itself has an interesting story,” remarked Benny Campos, Cozumel Country Club’s General Manager.

The island of Cozumel is located seven miles off the Atlantic coast of Mexico, just east of the Yucatan peninsula – a short hop from the resorts of Cancun and Playa Del Carmen in central Mexico. These days, tens of thousands of tourists flock to the area every year (both the mainland and the island), but in ancient times, there was a different reason to visit.

Campos continues, “Cozumel was a Mecca to ancient Mayan women, who made the trip from the mainland to worship the Goddess of Fertility, Ix Chel (pronounced Ish Shell). The name Cozumel, or Cuzamil, in Mayan means ‘Land of the Swallow’ for the multitudes of swallows that can still be seen on the island – and especially even now, on our golf course.”

Though it’s doubtful that many contemporary folks return to Cozumel Island to worship fertility, there’s no question that the island and Cozumel Country Club provides plenty of lush ground for a good time with its beaches, water sports, shopping and golf. We visited Cozumel as the second stop of our western Caribbean cruise on Carnival Cruise Lines – and the excursion was led by the ship’s on-board golf professional, Marc Johnson.

Campos says the vast majority of the clientele at the facility stems from guests at the island’s resorts and cruise passengers, so it’s no surprise that the club caters so well to visitors. Playing golf as part of your cruise experience is a terrific way to spend your time – and Cozumel Country Club is a shining example of why it works so well.

Cozumel CC was designed by the Nicklaus Design group (Steve Nicklaus is the designer of record), and it opened in September of 2001. The club itself is not on the ocean and gives little hint of being on an island, but there’s still quite the ‘away from it all’ feeling on its golf holes, primarily because there are only two spots on the entire course where you can see other golf holes or other golfers – and except for the occasional glimpse of hotel towers, there’s little to distract you from the club’s tropical setting.

The fact that Cozumel CC is owned and operated by ClubCorp only adds to the experience, guaranteeing that you’ll be well treated and find great playing conditions all around.

And the green grass of the golf course isn’t the only greenery to please you — the first thing you’ll notice upon arriving (along with the year-round warm temperatures) at Cozumel CC is the dense vegetation surrounding the course.

When asked to describe the way the layout plays, Johnson said “the fairways are really wide, but if you’re off the playing surface, there’s no way to retrieve the ball.” Truer words were never spoken, as the jungle flora is so thick it even prevents short jaunts to search for a wayward shot – take my advice and purchase plenty of golf balls.

The shrubbery is so impenetrable that you can’t help but marvel at the feat of building a golf course on this site, and how much work it must have taken to clear enough space for the holes. In that regard, Nicklaus Design Associate Greg Letsche (the project manager at Cozumel CC for Nicklaus Design) provides the story. “When I first walked the site, I saw that the vegetation was very dense – almost jungle-like. I also noticed that there were many specimen trees and rock outcroppings that could be utilized for strategy in the golf holes.”

Such is the mind of a golf architect. Where we see only barriers, they see opportunities.

You’ll certainly note the trees that Letsche mentioned, and also the rock. Seeing as this is just a hunk of land in what seems like an endless ocean, you may figure everything has been ground down to sand. Not true – there’s a surprising amount of rock on the property, which figured into the difficulties in constructing the golf course – and there were more things to worry about, too.

“Cozumel CC was the first golf course on the island,” Letsche explained. “The environmental impacts were very stringent. All materials from the site had to be utilized, such as the lumber from the clearing had to be used for the bridges – and the sand for greens and tees had to come from the island as well. The site basically had to balance within itself.”

It just added to the challenge of construction – and overcoming big challenges can also bring big rewards. But perhaps the biggest hurdle was obtaining all the materials necessary for building a golf course. “Probably the most difficult part of constructing Cozumel CC was getting all the materials to the island. Other than what was already on site, we had to bring in all the soil, sand and lumber that we’d need. In a lot of ways, we had to improvise as we went along.” Letsche remembered.

The end result is an enjoyable resort golf experience. As noted above, although the course is bordered by opaque jungle, it’s still very playable – and at 6734-yards (par 72) from the back tees, it’s rather short by today’s standards. The longest par four is only 428-yards, and there are very few forced carries.

Campos describes Cozumel CC’s playability: “There are only two holes on the golf course (16 and 18) that have forced carries to either a fairway or a green, so there is always the option of running the ball up to the green. A low running shot is usually not penalized on this golf course. In addition, almost all of the greenside bunkering is to the sides of the greens, so again, players can run the ball onto some portion of the green.”

We’ve already noted that the plant-life thrives at Cozumel CC – but so do the animals. “The most frequent comments we hear are about the wildlife the golfers see,” Campos elaborates. “The birds, iguanas, crocodiles and even wild pigs – they’re things that you just don’t see everywhere. The ‘sounds’ of the course are another thing people talk a lot about – how the birds are always singing – and how peaceful it is out there.”

It is indeed peaceful – but it’s also up to the golfers to help keep it that way. Around all the water features, you’ll see signs that read: “CROCODILES ARE FOUND IN ALL WATER FEATURES. PLEASE DO NOT ATTEMPT TO RECOVER GOLF BALLS FROM WATER FEATURES.” That’s good advice, though we didn’t see any crocs on the day we visited.

Hole highlights include the short par four fourth hole, which measures only 289-yards from the back tees. As would be expected for a short par four, you can hit driver to try and leave an up-and-down birdie – but if you fail to execute, you’ll pay the price. There’s water to the right and jungle to the left. The safe bet is to hit a lay-up off the tee and leave a short wedge into this elevated green.

The fifth hole is a nice par three – 204-yards with a waste area down the entire left side and a greenside bunker to the right. There isn’t much option other than to fly it to the flag or miss short right – and then it’ll be a challenging up-and-down.

Moving to the back, the par five sixteenth hole (570-yards) is one you’ll remember. Campos provides the description: “To my knowledge, the sixteenth hole has only been reached in two three times and eagled with a putt one time. The tee shot is to a wide fairway, but you’ve really got to consider where to place your tee shot – because if you’re in the wrong spot, the second shot carry can be as much as 180 yards over a mangrove swamp.”

For what it’s worth, it looks a lot longer than 180 yards.

To make it even more challenging, up near the green, the left side is protected by jungle, waste area and a greenside bunker – and the right side is also guarded by a bunker. Campos says the hole usually plays downwind – so even holding the green can be a challenge.

Finally, the par four eighteenth hole is one that “everybody loves to hate,” according to Campos. It’s relatively short (382-yards) but often plays into the wind – and there’s a 210-yard carry over a mangrove swamp to reach the fairway off the tee. The second shot requires another carry over mangrove (120-170 yards) to a slightly elevated green protected by jungle on the left and a bunker on the right – and there’s jungle long and right, too. Campos admits that the eighteenth is very intimidating, even at its relatively short yardage – and with the dual carries, it’ll take all the nerves you have left to navigate it safely.

Thankfully, the balance of the course is very resort-friendly, even if the jungle is prevalent at every turn – so you should have plenty of nerves left for the conclusion to the round.

As a side note, Cozumel CC was the first golf course in Mexico to earn designation as a ‘Certified Audubon Cooperative Sanctuary’ by Audubon International – which should give you an idea of the care that was (and still is) taken to preserve the natural environment for creatures of all types – including golfers.

Finally, you won’t necessarily need a cruise ship to get there. “We offer a variety of packages through many of the hotels on the island,” Campos said. “The best available are through the Playa Azul Golf-Spa-Beach Hotel and Melia Cozumel Golf and Beach Resort, which both offer free green fees at our course – the golfer only needs to pay cart fee per player.”

Of course, the club also offers packages through every cruise line that services Cozumel Island – so if you’re heading that way, you’ll get your chance to play the course.

And we’d highly recommend that you take advantage of the opportunity, for some terrific golf, sheer relaxation and a chance to see why the Mayan women flocked to Cozumel Island, all those years ago.

Nicklaus Design has successfully balanced the strict requirements of building a first-class golf course within the delicate ecosystem of the surrounding mangroves, marshlands and tropical rainforest. The golf course is… 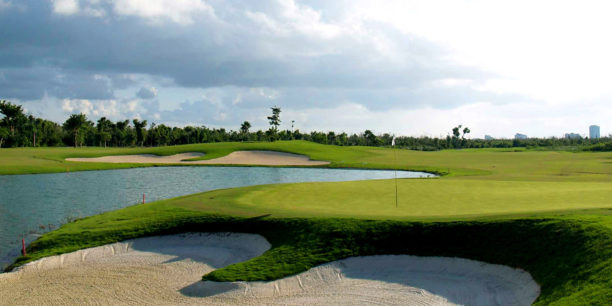