KIAWAH ISLAND, S.C. — Kiawah Island Golf Resort has been named one of the world’s most environmentally sensitive golf resorts by Golf Inc. magazine in its September 2008 issue, winning its inaugural “Green Award.” This comes only a few short months after GOLF Magazine named Kiawah Island Golf Resort one of the top “green” golf resorts in the U.S. in its April 2008 issue.

According to Roger Warren, President of Kiawah Island Golf Resort, this recognition is the result of years of hard work and the vision of those who developed Kiawah Island’s original land plan. “When Kiawah Island was first developed in 1976, a conscious effort was made to embrace the natural Lowcountry environment of this beautiful barrier island,” said Warren. “The original land plan was designed to blend into the setting rather than to dominate it. This close tie to nature has made Kiawah Island and its golf courses stand out in the realm of world-class resorts.”

According to Golf Inc. magazine, “Kiawah Island’s recognition by the judges amounts to a lifetime achievement award. Since the resort was developed in the mid-1970s, environmental preservation and nature conservancy have been key elements in the property’s operations and appeal. From prohibiting building forward of the secondary line of dunes to banning street lights on the island, which might lure loggerhead sea turtles away from the beach area, every effort has been made to protect and preserve the island’s native vegetation, wildlife and ecosystem.”

The awards competition sponsored by Golf Inc. is aimed at recognizing golf courses and companies that have adopted programs and practices designed to promote environmental sustainability and responsible environmental stewardship.

To view the Golf Inc. article, go to http://www.nxtbook.com/nxtbooks/cypress/golfinc0908/index.php?startid=26.

Last April, GOLF Magazine named Kiawah Island Golf Resort as one of their ten “Green Golf” award winners, praising the resort for “its seamless blending into the Lowcountry environment.” According to GOLF Magazine’s Senior Editor, Joe Passov, “These days it’s hip to be ‘green,’ but for years many top golf resorts have been leaders in environmental stewardship. In our first ever ‘Green Golf’ awards, we applaud these ten properties that have placed a serious emphasis on resource conservation and protection.”

Located along 10 miles of pristine beach just south of Charleston, SC, Kiawah Island Golf Resort is rated as one the country’s top golf resorts by Golf Magazine and Travel + Leisure Golf. It includes The Sanctuary – a AAA Five Diamond and Mobil Five Star-rated, 255-room hotel and spa – and 600 private villas and luxury homes. The resort has five championship golf courses, including The Ocean Course – host of the 1991 Ryder Cup, the 2007 Senior PGA and 2012 PGA championships. The resort also ranks as the number two tennis resort in the U.S. by Tennis Magazine, has nine restaurants, and features a renowned recreation and nature program. For more information, visit www.kiawahresort.com or call 800-654-2924. 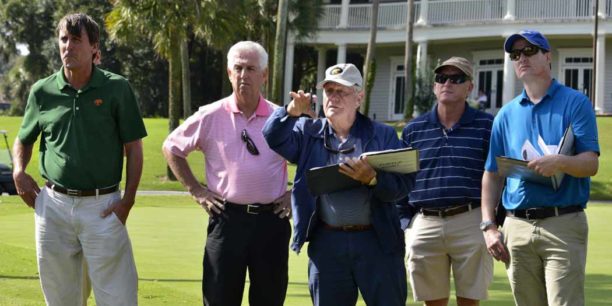