A multi-phase, strategic renovation project has helped to re-establish Pawleys Plantation as one of Myrtle Beach’s elite venues

Whether it’s the “Augusta effect” or the byproduct of an oversupplied industry, pristine conditioning has become a mandatory product offering for any operator hoping to compete for—let alone secure—the business and loyalty of an increasingly fickle golfing public. Nowhere is this phenomenon more true than in Myrtle Beach, South Carolina.

When it opened 20 years ago, the Jack Nicklaus Signature Course boasted a beautiful setting, verdant fairways, subtle putting surfaces guarded by natural hazards and the aesthetic allure of a barrier island. It was quickly regarded as one of the Grand Strand’s southern jewels, drawing golfers to an area of Myrtle Beach more renowned for its small, beach-town feel than its standout golf courses.

Time, however, began to take its toll on Pawleys Plantation as the course began to show its age. Meanwhile, new layouts began sprouting up just outside Pawleys’ gates—most notably the vaunted Caledonia Golf & Fish Club and True Blue—further fueling golfers’ demands for, and expectations of, supreme conditions.

Yet rather than giving up, owner Les Morris, a Myrtle Beach hospitality industry veteran, chose to fight back. Specifically, he decided to commission some much-needed renovations.

Upgrades are well and good, but Morris, like the majority of course operators, wasn’t thrilled with the prospect of investing millions of dollars in a comprehensive renovation project. What’s more, he preferred to not close the club during the project; doing so would inconvenience members and severely curtail Pawleys’ resort and meeting business. In response, Morris and his staff, under the guidance of ValleyCrest Golf Course Maintenance, studied the situation and developed a five-year, $500,000 plan to restore the Pawleys Plantation to its former luster while keeping the facility in play for members and guests.

The first aspect of the project, which commenced in winter 2005, was to address a chronic problem: excessive shade. Workers strategically removed approximately 250 trees and pruned others that prevented sunlight from reaching many tees, greens and fairways. According to officials, these were areas that had to be re-sodded every year because the grass kept dying; in effect, they were “spending the same $20,000 to $30,000 on sod every year without fixing the problem.”

In much the same manner, time had also taken its toll on many of Pawleys’ bunkers, which had become contaminated and unsightly. Officials launched a bunker renovation program, performing a facelift on many hazards that recaptured their former beauty without requiring complete reconstruction. To enhance aesthetics, the staff also removed unwanted grasses and scrub trees that obscured expansive views of the course and surrounding marshland, and replaced many of the on-course accessories such as flags and tee markers.

Management contends that the goal of the first phase was to “enhance the property so Pawleys Plantation would remain competitive with other top-end resorts” in the area. The improvements, which were completed before the golf season picked up in March 2006, cost approximately $250,000.

More than an aesthetic undertaking, renovation efforts have impacted Pawleys’ bottom line. According to officials, the club “felt confident enough in the feedback it received from players to reverse its recent trend of not raising green fees.” What’s more, the improved maintenance practices have helped to reduce drainage problems that “suck up labor and money,” which, in turn, “frees staff to work on things other than infrastructure.”

To be fair, the work at Pawleys is far from over; in fact, it’s less than half complete. In late 2006, the capital improvement campaign shifted to areas adjacent to the course, with additional tree removal and pruning along entryways and out-of-play areas. Future renovation plans, which will total an additional $250,000, include installing a Variable Frequency Drive irrigation pump purchased from a nearby course that recently closed; drainage improvements to accompany future tree removal and pruning; and stripping, leveling and regrassing numerous tees. The key through it all: keeping the course open for business.

“We cannot justify closing the course to our members and guests,” says David Eure, who was appointed superintendent of Pawleys in late summer 2006, several months after the first phase of renovations. “We have a good long-term plan. If we keep at it over the next five years, we will finish everything without closing.

“For $500,000, we will have done everything we need to do,” adds Eure, who, in addition to spearheading routine maintenance efforts, is charged with overseeing the remaining renovations as cash flow, scheduling and priorities dictate.

Regardless of the timeframe, Pawleys Plantation’s proactive measures have positioned the course to once again compete with Myrtle Beach’s elite venues.

“With this work, we’re hoping the course will live up to the expectations our guests and members have,” says General Manager Laura Rippy, noting that no one at the club was surprised that the course needed a refurbishment after two decades of operation. “In turn, that will increase revenue and resort play, and will also increase our accommodations and meeting business. Capital improvements to the golf course should improve revenue streams for the whole property.”

Who knows? Pawleys may once again be the course everyone else on the Grand Strand’s south end is chasing.

Planning Pawleys Plantation began with Jack Nicklaus. In October, 1986 the legendary golfer and prominent course designer stood in the middle of 582 acres and began designing a new course… 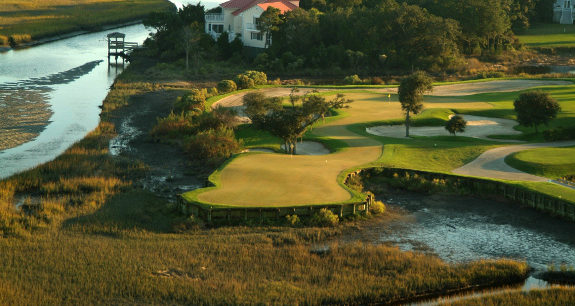