ESTERO — Jack Nicklaus wasn’t at the British Open to feel it firsthand, but he was able to by watching the television screen.

Nicklaus thought back on Sunday as he watched Tiger Woods weep for his lost father after winning the British Open, and runner-up Chris DiMarco share his emotions after losing his mother suddenly a few weeks before.

“It was a pretty emotional week for both of them,” Nicklaus said on Tuesday after a site visit at Old Corkscrew Golf Club, which he is designing and could open late this year. “It’s kind of a shame that both of them couldn’t have won.”

Woods talked of missing the chance for his father to see the victory. Nicklaus had the same feelings 26 years ago, and also at the British Open.

His father, Charlie, had passed away that February at the age of 56 of pancreatic and liver cancer. Leading up to that, Nicklaus had been playing “all right,” but not dedicating himself as much to the game as he had previously.

“I’m enjoying doing my hunting and fishing and doing things with my kids,” said Nicklaus, who was 30 at the time, the same age as Woods is. “I really didn’t worry too much about my golf. I got into a period there from 67-70, I was doing a lot of other things.

“I was playing good golf, but it really wasn’t that big a deal to me one way or the other.”

And then his father passed away, and it jolted Nicklaus back into what drew him to golf in the first place: his dad.

“I sort of realized that he had certainly lived his life through my golf game,” Nicklaus said. “I really hadn’t probably given him the best of that. So I sort of got myself back, so ’70 was an emotional one for me from that standpoint. I finally came back and won.”

Nicklaus, who beat Doug Sanders in a playoff at St. Andrews, had not won a major since the 1967 U.S. Open. Besides winning again and thinking of his father, Nicklaus had not thought of any other significance about the British Open victory. It didn’t take long for that to change. When he walked in the press room, he was reminded that it was his 10th major victory, three away from tying the great Bobby Jones.

“Never even thought about a number,” Nicklaus said. “And all of a sudden, it became an issue from that point on. Tiger’s had this from day one.”

Woods’ win on Sunday was his 11th, seven behind Nicklaus’ record 18. While some shake their heads at Woods’ pace, Nicklaus doesn’t.

“I’m surprised he hasn’t been there before,” Nicklaus said of hitting No. 11. “He’s a very, very talented young man and I think it’s probably good for the game of golf to have records to be broken — whether he’ll break it or not, who knows? But if he does break it, I hope I’m allowed to be the first to shake his hand.”

If Nicklaus does, those hands probably will be not too far removed from some golf course architecture drawings. Nicklaus has kept himself plenty busy, and seen much more of the world than before if that’s possible, with his design business.

His design company will finish its 300th course and Nicklaus will finish his 250th. What excites him is where he’s designing them.

“We’re going to a lot of places where we have emerging markets,” he said, rattling off Russia, Croatia, and the Caribbean, Uruguay, Argentina, Chile, South Africa, the Czech Republic, Bulgaria, Turkey, China, Korea, and India.

Perhaps the one he’s most excited about is right in his backyard. He is redesigning the North Palm Beach Country Club.

“It absolutely makes no sense whatsoever,” he said of doing the project. “It’ll be great fun.”

Nicklaus is charging all of $1, similar to what he did at Lost Tree and at Ohio State’s course.

Old Corkscrew will be a little more than that, but so far he’s happy with the progress.

“I didn’t really have much to change,” he said. “They’ve done a nice job. It’s going to be a really nice golf course. We opened up some areas to give a little bit more room to play golf. It is going to be open to the public, so you want to make sure that the public has some places where they can go ahead and slice it a few places or hook it and still find your golf ball and play.”

In the meantime, when he’s not designing golf course, part of Nicklaus’ play involves fishing. And he’s found some competition, not just from the fish. It turns out his wife, Barbara, isn’t too bad.

“She fishes well,” he said. “Every time I go, she outfishes me.”

The Jack Nicklaus-designed par-72 championship layout meets the highest design criteria. Since OCGC is not part of a real estate development, this course is a “core” or “stand-alone” extraordinary golf… 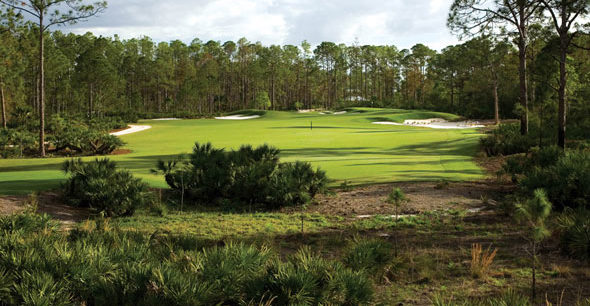