Even in the midst of intense competition, professional golfers sometimes like to take a step back and enjoy their surroundings.

At this year’s BMW Charity Pro-Am at the Cliffs, they have a new course to play, and a new set of views to enjoy. The Cliffs at Walnut Cove, near Asheville, has been added to this week’s Nationwide Tour event, joining The Cliffs Valley and The Cliffs at Keowee Vineyards.

Walnut Cove, a Jack Nicklaus design, officially opened on Wednesday, with Nicklaus and actor Kevin Costner playing a ceremonial first round. The pros began practice rounds on Monday, and so far Walnut Cove is getting five-star reviews.

“It’s nice to look around and have the framework,” said Gary Hallberg, who will play Walnut Cove today. “The mountains and the hills, framing the picture, it’s great. I think it’s relaxing when you can focus on a point far away.”

The new course means a new format for the fifth-year event. Each of the next three days, all 168 pros and their amateur/celebrity partners will play each golf course once. There will be a 54-hole cut after Saturday’s play, and then all play will be at Cliffs Valley on Sunday. The celebrities will be divided among the three courses.

The golfers said the distance between the courses is a bit difficult, but they do not mind playing three courses.

“It’s a fun week, and really only one golf course is way out there for us,” said Mark Wurtz, referring to Keowee Vineyards. “So it doesn’t bother me.”

At a news conference before the ceremonial round, Nicklaus said he did not design the golf course for tournament play, but The Cliffs decided to add it to the Pro-Am. Nicklaus said he was pleased with the finished product, adding that Cliffs owner Jim Anthony gave him the freedom he needed to make design changes on the fly.

Nicklaus, who has designed 236 golf courses worldwide, is working on another Cliffs course in South Carolina, The Cliffs at Keowee Falls. Walnut Cove is a par-71, measuring 7,278 yards from the back tees.

“It’s a nice, pleasant golf course that I hope people will enjoy,” Nicklaus said. “It’s got enough holes on it that have enough defense that it will stand on its own two feet.”

Nicklaus said he did not expect a lot of high scores at Walnut Cove, but Hallberg said he felt it was the hardest course of the three.

Barcelo said the swirling winds make it a challenge, and Wurtz said there is more of a chance for high numbers at Walnut Cove because of trouble around the greens.

Wurtz also said Walnut Cove is already his favorite course of the three, and all of the pros agreed it is a good addition to the event. Hallberg, who also has played on the PGA Tour, said the BMW Pro-Am is one of his favorite events.

The Cliffs at Walnut Cove

More News from The Cliffs at Walnut Cove

The Cliffs honored in Golfweek’s Best Residential Courses for 2017 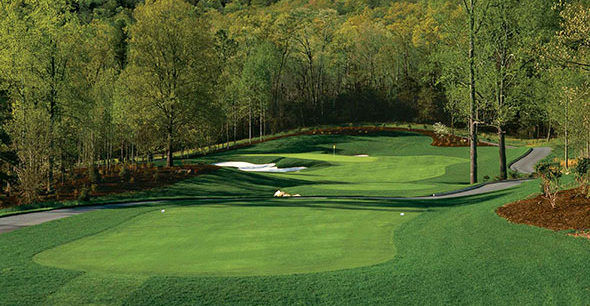